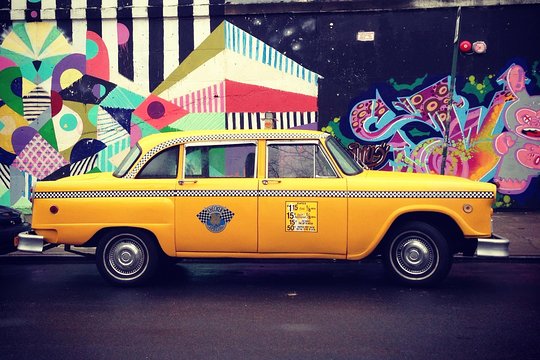 Select Date and Travellers
From
US$495.00
per group (up to 5)
Date
2 travellers
Options
Low Price GuaranteeNo Booking Fees
Overview
Highlights
What to Expect
Itinerary
This is a typical itinerary for this product

Brooklyn Bridge, one of the world's first suspension bridges, built-in 1870

South Street Seaport, a cobblestone dock featuring some of the world's most impressive boats

Manhattan Bridge, used by over 350,000 commuters each day

Chinatown, home to the largest Chinese population in North America

This tour has not yet been reviewed, but you can read what other travellers have to say about this operator.

76ckb
Edinburgh, United Kingdom
185
No show
As per other reviews the taxi never showed. We arranged through an agent and received a voucher with no pick up…
Read more

palmierientp
Westville, New Jersey
20
Paid - No Show
DO NOT BOOK THIS TOUR!!!!! I booked this tour in August for my husband's birthday. I called and confirmed before…
Read more

Kanesmum
3120
Great experience in New York City!
We had a great hour in a great car with a great driver. Always been fans of the TV series "Taxi" and wanted to…
Read more

Mello2568
Corydon, Indiana
218
FRAUD ALERT! DO NOT BOOK THIS TOUR
I cannot express enough to anyone who reads this review, do not book this tour! This company is a scam. Here is…
Read more

John deammo
10
Amazing time
I booked this tour for my wife birthday and it was just amazing. Everyone loved the tour and the car was simply…
Read more

drp a
20
The Brewery Tour was amazing!
This was such a great experience... Robert was wonderful and the cab was amazing. We went to three breweries and…
Read more

stacy857
Birmingham, Alabama
22
The highlight of our new york city vacation!!!
Very knowledgeable, driver was also courteous, and all around nice guy. We would recommend this tour to anyone…
Read more

brooklyncat
London, United Kingdom
11
Amazing tour!!
We took the pizza tour and it was great!! Good pizza and locations in brooklyn. The car was also amazing and a…
Read more