Expedia.com
Travelocity
Orbitz.com
View all 5 deals
Prices are the average nightly price provided by our partners and may not include all taxes and fees. Taxes and fees that are shown are estimates only. Please see our partners for more details.
choymy
Subang Jaya, Malaysia
64

Peter Pan: Great place if you'd like spend 2 days doing nothing in bliss

This place have some upsides and downsides as well

Great:
1. FOOD! It is totally value for money. The amount of seafood and meals they feed you per day is why I think this place is not that bad after all. They are very generous in amount and quality.
2. Quiet Beach.
3. Friendly and helpful staffs.
4. Small water/beach activities to help you pass some of your time

Not So Great:
1. Accomodation. It is not bad for the price we payed but personally I hope it was better.

All in all, me and my friends had a great & relaxing time with some minor kayaking and going to the waterfalls.

See all 190 reviews
Nearby Hotels 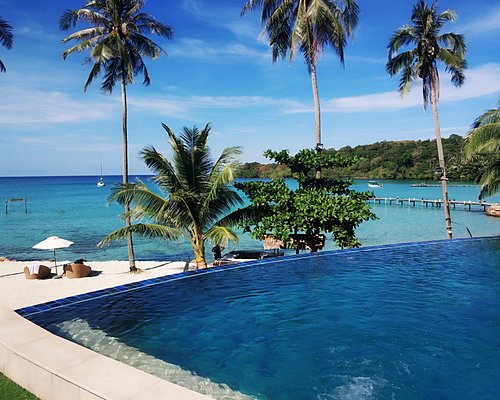 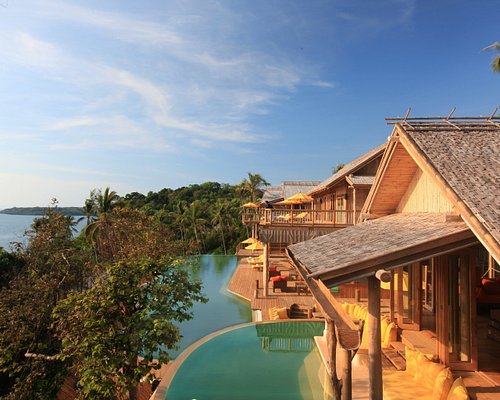 Hotels.com
View deal
Booking.com
US$315
Agoda.com
US$205
Expedia.com
US$268
View all 17 deals from US$205
390 reviews
0.2 km from Peter Pan Resort
We compared the lowest prices from 17 websites
Breakfast included
Koh Kood Beach Resort

Hotels.com
View deal
Expedia.com
US$72
Agoda.com
US$37
Booking.com
US$66
View all 15 deals from US$37
307 reviews
3.7 km from Peter Pan Resort
We compared the lowest prices from 15 websites
Breakfast included
The Beach Natural Resort

The positives:
1. Located on a stunning beach
2. Lovely beach bar

The negatives:
1. Unfriendly manager, a blond lady who could not be less interested if she tried. No welcome given just herded towards reception when we arrived off the boat
2. Expensive for what you get. Rooms very basic and not all that clean
3. The breakfast was not at all nice. Congealed food in the buffet trays.
4. No information in the rooms about the resort or island. This is pretty standard.
5. Lack of sinners for guests.
6. They offer wifi but it is non-existent. I appreciate it is a remote island but the wifi at Shantaa is perfect.

We stayed for 1 night and checked out. Supposed to stay for 5 nights. Luckily Shantaa had a cancellation - a stunning resort and only a fraction more expensive. Definitely worth it.

I have travelled Thailand extensively and I do not often post bad reviews. If you want poor value for money then this is the place to stay.

This review is the subjective opinion of a Tripadvisor member and not of TripAdvisor LLC.
LKocaturk
Lafayette Hill, Pennsylvania
3460
Reviewed 13 March 2012
Captain Hook

I'm not sure why these two resorts are lumped together, as people are reviewing two different properties owned by the same company. The properties are very different. We stayed at the Captain Hook Resort. As noted by another reviewer, the hotel is technically not beachfront. However it is a less than 10 m swim/kayak (free rental) to the beach across the small river in front of the hotel. It's about a 5-minute kayak to another, better beach on the other side of the peninsula occupied by the hotel. My husband and I went for our honeymoon, and the beach was deserted and absolutely pristine. It's actually the same beach (just further down) as the vastly more expensive Soneva Kiri Resort. The rooms are rather rustic, particularly the bathrooms, and while we slept okay, it could have been better. The simple, outdoor bathroom we didn't mind so much, since really it's just a bathroom. But the proximity to such fantastic, uncrowded (or in our case, deserted) beaches was well worth putting up with a less-than-luxurious room. I thought the restaurant food was excellent and well-priced for such an isolated resort. They had free snacks/juices at various times throughout the day and if you don't mind limited choice, you could probably eat for free all day. But I'd recommend going a la carte, it was worth it!

We stopped by the more expensive Peter Pan and Tinkerbell Resorts at the other end of the island, and were very glad that we didn't stay there. The beach was a main beach on the island and much more crowded and not as beautiful as our own "private" beach. The Captain Hook Resort was nearly all domestic tourists, who for some reason didn't seem keen on kayaking around to the nicer beach or even venturing across to the also-uncrowded beach just across from the hotel. To each his own, better for us to have it to ourselves! The Peter Pan/Tinkerbell Resorts seemed to be mostly European guests sunbathing all over the beach, so it felt much less exotic and much more crowded. Can't comment on the rooms or food at these resorts.

Room tip: Pool villas have much better views than the standard rooms. We didn't book one as there is a very nice pool next to the bar and it seemed silly to pay so much more for a tiny pool that's not even enclosed (i.e., everyone can see you). But if the view is important, it really is much better from these rooms.
Ask LKocaturk about Peter Pan Resort
3  Thank LKocaturk

This review is the subjective opinion of a Tripadvisor member and not of TripAdvisor LLC.
RichieBC
Bangkok, Thailand
96
Reviewed 2 March 2012
No Staff and No Beach

This resort is not beachfront at all, it is rock front and the staff speak little if any English at all and just walk off, not understanding what you asked for and thus doing nothing. Rooms smell funny, not sure if it is rotten wood or materials but something like that. Bathrooms were some outdoor deal and all that gets you is mozzies everywhere, no way of keeping them out of the room and of course no way to ask the staff to help.

Food was OK to be fair and it is not a bad location, despite lack of beach, but looking over at Away where we ate dinner i suspect is a better place to stay as they do have a beach and they have i saw when there been doing a lot of rebuilding and making new rooms etc. Not sure what their prices are though.

Room tip: Take your own mozzie repelant to plug in and get them out of whatever room you stay in.
Ask RichieBC about Peter Pan Resort
1  Thank RichieBC

This review is the subjective opinion of a Tripadvisor member and not of TripAdvisor LLC.
Monique v
Purmerend, The Netherlands
107
Reviewed 27 January 2012
Fantastic place

Everything was perfect ecxept for breakfast and dinner.
You can enjoy both things in the next hotel Tinkerbell.
It is only 200 meters up the beach and owned by the same people.
Beautifull beach and fair priced rooms.

This review is the subjective opinion of a Tripadvisor member and not of TripAdvisor LLC.
pongsak
Sydney
1412
Reviewed 24 January 2012
Beautiful

Peter Pan has different types of accommodation, we selected the hut with fan. We found it cosy and clean. The hut has an open air shower which is very nice, no warm water which you don't need. Only a few minutes walk to the beach for swimming or to watch the sunset. A long stretch of beach with clean and clear water. I would suggest you buy the package which include the transfers from the main land and activities such as diving, kayaking, fishinging, trekking to the waterfalls and driving around the island. The package also include 3 meals, breakfast/lunch/dinner. Very nice food especially for dinner which they serve plenty of seafood. If you have time to spare, visit Ao Salad - a small fishing village that all the resorts come here to buy fresh seafood for their kitchen. The staff at this resort is very friendly, serve you with a big smile.

This review is the subjective opinion of a Tripadvisor member and not of TripAdvisor LLC.
View more reviews
PreviousNext
1…121314…
<script type='text/javascrip