Booking.com
PricelineUS$125
StayForLongUS$139
View all 17 deals
Prices are the average nightly price provided by our partners and may not include all taxes and fees. Taxes and fees that are shown are estimates only. Please see our partners for more details.
Elizabeth10
Johannesburg
11656

Convenient if you need to stay over before an early flight out of Innsbruck. Wifi very slow, aircon in our room didn’t work, nor did the extractor fan in the bathroom. We would, however, stay there again if we had an early flight because it is so convenient.

See all 401 reviews
Nearby Hotels 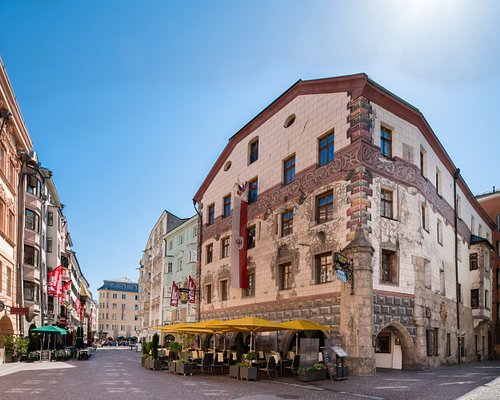 StayForLong
View deal
FindHotel
US$153
Lol.travel
US$146
Hotels.com
View all 15 deals from US$146
1,573 reviews
2.9 km from Penz Hotel West
We compared the lowest prices from 15 websites

Expedia.com
View deal
Pay up to 12X
Hotels.com
US$131
Tripadvisor
US$131
Trip.com
US$154
View all 15 deals from US$131
553 reviews
3.9 km from Penz Hotel West
We compared the lowest prices from 15 websites
Breakfast included
Hotel Innsbruck
US$132

Expedia.com
View deal
Free cancellation
Reserve now, pay at stay
Hotels.com
US$132
Agoda.com
US$102
Lol.travel
US$150
View all 17 deals from US$102
1,919 reviews
2.8 km from Penz Hotel West
We compared the lowest prices from 17 websites
Breakfast included
Hotel Grauer Bar
US$192

Priceline
View deal
eDreams
US$95
Booking.com
US$95
Agoda.com
US$95
View all 5 deals from US$95
49 reviews
1.5 km from Penz Hotel West
We compared the lowest prices from 5 websites
Top Rated
Riedz Apartments
US$164

Hotels.com
View deal
Reserve now, pay at stay
Expedia.com
US$164
Official Site
US$142
eDreams
US$155
View all 11 deals from US$142
126 reviews
2.7 km from Penz Hotel West
We compared the lowest prices from 11 websites
Breakfast included
Hotel Kapeller Innsbruck
US$123

Hotels.com
View deal
Free cancellation
Reserve now, pay at stay
Expedia.com
US$123
Priceline
US$118
eDreams
US$118
View all 11 deals from US$118
534 reviews
5.4 km from Penz Hotel West
We compared the lowest prices from 11 websites
AC Hotel Innsbruck
US$202
US$139

I had a meeting and to postpone the transfer till next morning this hotel after my late arrival was just a perfect solution. Whereas I asked for 1 double bed I got 2 single beds and, apparently typical for Austria (??) there was nothing to prepare coffee (or even tea) at the room. Apart from that all good.

This review is the subjective opinion of a TripAdvisor member and not of TripAdvisor LLC
asamiya2016
Aarhus, Denmark
3443
Reviewed 29 August 2019
The Hills Are Alive, With The Sound Of Music

Yes another bit of music. Another that made me want to come to Austria.
My husband wanted to go to Innsbruck, as his mother and step-father had been there.
So Innsbruck in the Alps.Here we go!!!

With the roadworks, we nearly got lost. And that's with our GPS!!.
Once again.....I was thinking why I got my husband to book the hotel. I did tell him, I wanted to be near the city centre, but he said there was a shuttle bus to the city centre.....Ok...........btw he was wrong.

When we finally arrived, we looked for the car park. Now there was amount of car parks, but not the hotel on. So we parked outside the hotel.
For anyone who is driving, the car park is on the right hand side opposite the hotel. There is a sign, but it's small and can be easily missed. (I'll post it on the photo extra).
We went up to book in. Wondering with the stairs, how we was going to get our luggage up those stairs. Penz Hotel West, thought of that. There is a security door, they use for elderly, disable etc. The hotel reception, came down to open the door for us. There are toilets and a vending machine, as well as the lift which took us to our floor.

We got to our room....OMG THE ROOM!!! WOW. Our room was the best room so far. ( so other hotels).
I mean from the outside, the hotel didn't really look much, but the room..the room.....it was ultra modern. It's a pity we couldn't stay longer, than the two nights.
Unpacking, I spotted a magazine about Innsbruck, but it was in German. I learnt French in school, not German. So we went down to the reception, to see if there was an English version. There wasn't ; ; . He did have some problems finding anything in English, but he did finally find something.

Going back up to our room, my husband really wanted to go in to the city....unlike Vienna.
We got the GSP ready, to head in to the city. FYI the bus stop is near the hotel.
Remember, there was roadworks...a lot of roadworks.
( I would go on about the Innsbruck city centre, but this is about Penz Hotel West.)

There are and we didn't notice until the next day, metal blinds outside the window. This blocks the sunlight, to the room. A great idea!! Wish other hotel that face to sun nearly all day, had this. It will help keep the room cooler, with the AC. (I only filmed it working. Operated from inside the room, via a switch near the bathroom.)
Our room had a bath tub/shower, and a toilet ( which was very tall, that poor feet was left dinging in the air lol.)

The breakfast was a little let down. If you wanted coffee (which my husband wanted), you have to ask for it (freshly made though).....but there were no signs up, saying about asking for coffee etc. I had hot chocolate, which wasn't that good.
Yes there was hot and cold hot food, but the selection wasn't that great. There were cold cuts, either there were a lot of pork cold cuts (which I'm not a fan of). Not a lot of cheeses or other selections.
The hot food was only scrambled eggs and sausages, that we could find. (My husband didn't like both of them.) I had a few very small square of bread, with a packet cream cheese and yogurt. Luck we planned on our leaving date, to pop to the local supermarket.( sorry)

But in the whole, it was an relaxing luxury stay. It was let down, with the breakfast selections.
We would come here again, with the view from our room window.....
The Hills Are Alive, With The Sound Of Music!!

Thanks for staying with us. We appreciate your feedback!
Hope to see you again in the future.

Report response as inappropriateThank you. We appreciate your input.
This response is the subjective opinion of the management representative and not of TripAdvisor LLC
Marflor6889
5
Reviewed 19 July 2019
The best!!!

The best hotel so far...not so expensive yet best service, friendly staff, nice room, very good location and very good breakfastamong all the hotels we stayed, they had the best breakfast highly recommended

Thanks for staying with us. We appreciate your feedback!

Report response as inappropriateThank you. We appreciate your input.
This response is the subjective opinion of the management representative and not of TripAdvisor LLC
Tero L
Turku, Finland
1046
Reviewed 26 June 2019
good airport hotel

Right next to airport and car rental places. Nice clean rooms with good breakfast. If staying longer time in City would choose something with better location but night before flight this is good choice.

Thanks for staying with us. We appreciate your feedback!

Report response as inappropriateThank you. We appreciate your input.
This response is the subjective opinion of the management representative and not of TripAdvisor LLC
Emily W
Singapore, Singapore
17493
Reviewed 15 June 2019
Disappointing

The location is great near the airport. The hotel is a short distance from the hotel, about 800m. I won't recommend to walk though unless you don't have heavy luggage. But then again with taxi it will be like 2 minutes. It is a modern hotel with fairly new and up to date renovations, the usual you expect from a good class hotel. Unfortunately in spite of looking like a great modern hotel, they are a little lacking in the details. First on arrival there is no ramp to roll the luggage up. So you'll have to carry your heavy luggage up the stairs. There was no one at the reception and myself and 2 others waited some time until the officer came from the bar. It's late at night and I understand there is no need to have many officers at the reception. What you can do is put a simple bell there for arrivals to ring to inform night staff that there is someone there. A family arrived the next day and the old lady asked for help with the suitcases and the reception said they don't provide such services. You are an airport hotel and people arrive with luggage at the airport. The least you could do is to build a ramp. You wouldn't help an old lady with her heavy luggage?
There is lift. So at least getting to the room is easy. The room is big, mostly clean with the usual bar fridge, safe, some toiletries, tv, desk... There are no English channels on tv. In room it would be great to provide a kettle and tea and coffee expected of modern hotels. The room was very hot and stuffy on arrival and in spite of switching on the air-conditioning, the temperature stayed at 27 degrees. When I called the reception I must have sounded irritated. I am! I traveled since 830am on multiple flights and now at the hotel at 11pm hoping to take a hot shower and rest in a cool comfortable environment. My apologies for not speaking to you in a "normal voice" as the officer at the reception said. He said it is central control and turned down the temperature. Still it took a long while to cool down. I fell asleep from exhaustion before it was comfortable. The reception and lobby area are not air-conditioned. I understand that the area has mostly cool weather most of the year but this is just the end of spring. Summer temperatures may be even hotter.
They provided only bath towel and that is fine. In the shower there is no place to put toiletries.
Breakfast has good variety.
So yes the details are lacking even though it looked good on the outside.

Thanks for staying with us. We appreciate your feedback!
Of course, we will try to improve the points you have mentioned, but we would like to point out that there is a door with a bell next to the stairs, which leads you comfortably to the lift at ground level, so you do not have to carry your heavy luggage.

Report response as inappropriateThank you. We appreciate your input.
This response is the subjective opinion of the management representative and not of TripAdvisor LLC
View more reviews
PreviousNext
12…67