“Paradise in the Jungle”
N25DXzZfT204
other travellers have booked this property

Review of Rustic Chic Jungle Chalet at the Tip of Borneo 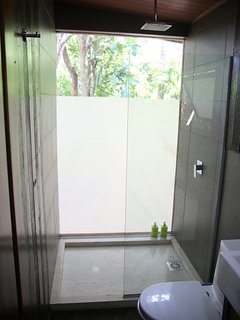 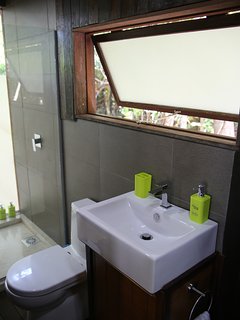 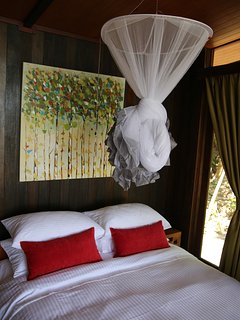 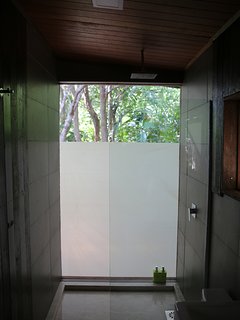 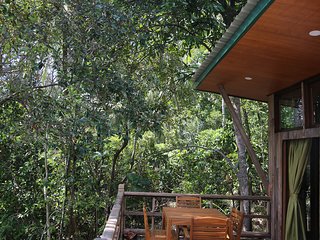 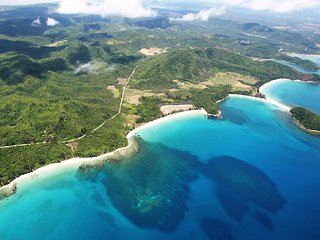 Excellent - based on 27 reviews
Write a Review

Fantastic accommodation and location. We were really taken care of for our stay at this remote hideaway. We appreciated the eco-friendly approach to tiffin take away boxes (delivered from local restaurants) and a large water dispenser rather than single use plastic bottles. The local staff were friendly and extremely helpful.

The accommodation was great with beautiful sunsets, an idyllic sandy beach with great snorkelling.

Highly recommended! We enjoyed it so much we returned at the end of our holiday for another few nights.

Date of stay: May 2017
Would you recommend this hotel to a friend?   Yes.
Was this review helpful? Yes
This review is the subjective opinion of a Tripadvisor member and not of TripAdvisor LLC.
Thank you for your review. I'm really pleased you had such an enjoyable stay and came back to stay at the end of your holiday. It's great that you recognise our efforts to help the environment and I hope you can return to us in the future.
This response is the subjective opinion of the management representative and not of TripAdvisor LLC
Problem with this review? Thank you. We appreciate your input.

A short break for Sue's birthday away from it all. Based in Kota Kinabalu we know the owners and had been promising ourselves the oportunity to get away for a few days. Sue's birthday provided the excuse and it didn't disappoint. Snorkeling with Moray eels, bat fish, seal faced puffer fish and Nemo and friends. The birthday BBQ was excellent and the sunsets ..........

Date of stay: May 2017
Your age range 50-64
Would you recommend this hotel to a friend?   Yes.
Was this review helpful? Yes
This review is the subjective opinion of a Tripadvisor member and not of TripAdvisor LLC.
Thanks for our review. I'm pleased Sue had a lovely birthday and it was great to be able to accommodate you.
This response is the subjective opinion of the management representative and not of TripAdvisor LLC
Problem with this review? Thank you. We appreciate your input.

Nice isolated position with good instructions to get there but a car is a must. There are some nice drives around the locality but Kudat is a waste of time. An evening drive gave best opportunity for birding. Well positioned for a nice beach, spoilt by the litter (plastic bottles) and sand flies which clearly the accommodation cannot control. Snorkling gear of good quality was provided free of charge and the best spot is just to the left of the beach access. Jetol who welcomed us was very friendly and helpful. Indeed he offered to carry our suitcases along the undulating path from the car park spot to the cabin. Access steps up to the cabin are steep. The cabin itself was basic, ample for two. Its basically a single room with a small kitchen and small bathroom which became smelly with use as it was bloody hot and humid. So thank goodness for the air conditioners. A mozi net and spray was provided. There was a large deck out the front if you wanted to brave the heat, humidity and insects. Some birds were also spotted from the deck. Watch out for the friendly cat who when he has had enough of you will bite. There is no mobile phone reception or wifi (no big deal as this is why some go on holiday) but a TV with a wide selection of films and TV series is provided. Tip Top was the pick of the restaurants but avoid the western food. The Secret Garden, a short walk along the beach was also very good for local food. Tommys was awful.

Date of stay: April 2017
Would you recommend this hotel to a friend?   Yes.
Was this review helpful? Yes
This review is the subjective opinion of a Tripadvisor member and not of TripAdvisor LLC.
Problem with this review? Thank you. We appreciate your input.

My husband and I stayed for two nights as part of a 2.5 week trip to Borneo.

We stayed in a mixture of places from zero stars to five stars so have a very open mind.

The walk to the lodge is not for the unfit, especially when carrying luggage and that's coming from someone who climbed Mount Kinabalu whilst in Borneo. It's a good 3-4 minute walk which sounds nothing but you are walking through uneven terrain which when wet (as it so often is in Borneo) can be extremely slippery.

The lodge itself is lovely and as previously mentioned in reviews, very tranquil. The bed was uber comfortable and there were plenty of fans.

I was disappointed with the lack of amenities; no bath mat / hair towel / hair dryer / drawer or hanging space... in fact no storage at all. In addition they have folding doors that don't fully open due to a supporting beam blocking it which was a disappointment.

One major complaint is that we had two cockroaches in the lodge!!! I have stayed in the jungle in India; Sri Lanka and Brazil and have never yet seen a cockroach in my accommodation so I was not impressed.

In terms of food breakfast was adequate but nothing exciting. The first night we ordered the take away as it was so rainy and requested a bottle of red wine from the 'mini bar' and were sorely disappointed to be told they had no red wine when the food was delivered so we were left with nothing to drink of an alcoholic nature).

On a plus note Jasper was great, very friendly and the night security guys were particularly helpful.

All in all was it worth the time and effort to get there...no. The beaches in KK are just as nice and the Rasa Ria Shangri-La is almost the same price but 10 times better.

Date of stay: April 2017
Was this review helpful? Yes
This review is the subjective opinion of a Tripadvisor member and not of TripAdvisor LLC.
Thank you for your comments. I was very disappointed to learn that your stay was not the best of experiences, which is in contrast to most people staying at our Treetops Chalet. I very much apologise for this and will ensure I get to understand what went wrong: the staff should have carried your luggage for you (most people enjoy the jungle walk to the the chalet); there should have been a bath mat; due to power constraints we are unable to have a hair dryer; despite the supporting beam, the folding doors do open fully and the staff should have demonstrated how to do this; there was red wine in stock and so I will find out what went wrong there; for the cockroaches, we pride ourselves in the cleanliness of the chalet, despite being in the middle of the jungle. I can only guess that due to the rainy weather, the cockroaches were looking for shelter despite housekeeping's best efforts to keep them away (we don't like using chemicals which not only kill pests such as cockroaches, they also kill all types of beautiful insects including the magnificent butterflies and beetles which we have around. I'm very disappointed to learn that you think the beaches in Kota Kinabalu are just as nice - the Tip of Borneo is renown for its beautiful beaches and clear sea, which far excel those around the Kota Kinabalu area. Perhaps due to the rainy weather, you did not see the beach and sea in all their glory. I'm pleased you found the staff helpful - we pride ourselves on only employing staff from the local Rungus tribe and they are very warm and kind-hearted people. Once again, I sincerely apologise that your stay did not live up to or exceed your expectations and I thnak you for your comments. I will strive to ensure we continuously improve.
This response is the subjective opinion of the management representative and not of TripAdvisor LLC
Problem with this review? Thank you. We appreciate your input.

Staying at the Hibiscus chalets is a truly unique opportunity to experience a completely unspoilt beach and bay at the top of Borneo. This place will not be the same in a few years time once it is taken over by luxury hotels.

Date of stay: February 2017
Would you recommend this hotel to a friend?   Yes.
Was this review helpful? Yes
This review is the subjective opinion of a Tripadvisor member and not of TripAdvisor LLC.
Problem with this review? Thank you. We appreciate your input.
Previous Next
1 2 3 4 5 6
Updating list...
Do you own a holiday rental? List it here.

Looking for a place to stay in Kudat?
View all 9 holiday rentals