US$104
US$20
View deal
Free cancellation until 11/12/21
Hotels.comUS$34
eDreamsUS$104
Booking.comUS$104
View all 14 deals
Prices are the average nightly price provided by our partners and may not include all taxes and fees. Taxes and fees that are shown are estimates only. Please see our partners for more details.
Anita A
Sabah, Malaysia
4736

Room for twin sharing basis was a good size. We stayed at first floor but if u r lazy, there is an elevator instead of staircase. Bathroom was clean, however the hose of the toilet water pressure was so strong that if u r not careful, u tend 2 get a blast - a shock 2 ur nether region. Shower was quite low even for a barely 5 foot nothing of me. Housekeeping was good - regret that i didn't take away all d complimentaries goods given each cleaning session as it was replaced every time they clean - standard for 4-star hotel (1 forgot abt that!).

Pancake for the buffet breakfast was excellent - i can still remember d taste.

During my stay wi-fi at the first floor was off. Have to go down 2d lobby to surf d net. only 1 pc that enable internet surfing.

view from the window of our room look into a house which is nothing to write abt...

Overall quite good and d big plus is it is very near to Angkor wat however quite far to the center town - night markets!More

Show less
Room tip: probably better to get a room at the top floor for a better view.
See all 146 reviews
Nearby Hotels 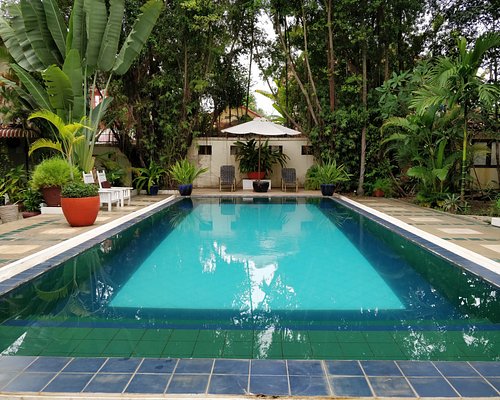 Priceline
View deal
Free cancellation
Reserve now, pay at stay
Booking.com
US$26
Agoda.com
US$26
eDreams
US$26
View all 12 deals from US$26
286 reviews
We compared the lowest prices from 12 websites 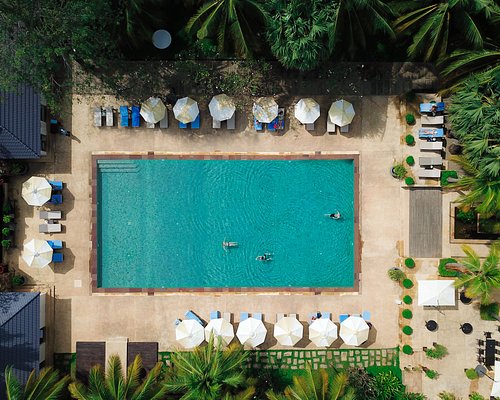 Breakfast included
THE PRIVILEGE FLOOR by Lotus Blanc
US$498

Priceline
View deal
Free cancellation
Hotels.com
US$55
Expedia.com
US$55
Booking.com
US$73
View all 16 deals from US$55
1,210 reviews
3.9 km from Smiling Hotel
We compared the lowest prices from 16 websites
Breakfast included
Sponsored
BE Happy Guesthouse Siem Reap
US$34

If I could give 6 stars for service I would, the people here are magnificent. it's rare to find a hotel where excellent service is provided by everyone from the manager (Roth K), to the reception desk, restaurant staff, tuk tuk driver ("Mr Payne" as we called him) and tour guide. Even though the last two are not directly employed by the hotel, the hotel referred us to them and we could not have been more pleased. We've traveled pretty extensively and our experience at the Smiling Hotel & Spa (where we stayed in October 2012) is to this day unmatched. We had a presidential suite, which was huge and featured a large jet tub. The pool was cleaned dutifully by a young man every morning and was the largest most pristine pool I've ever seen at a hotel. Till this day we still talk about this marvelous pool. The breakfast offered a large selection of asian and western foods and my husband could not get enough of the made-to-order omelettes.

The hotel may not be in the center of Siem Reap, but I wouldn't want it to be. Who wants to hear all that noise at night? The US$3 tuk tuk ride to the center was more than fair, especially when you grapple with US$20 taxi rides in New York City and even worse fares in Tokyo. Siem Reap, the hotel, the people, the food, everything about our trip was wonderfully charming and we cannot wait to go back.

I'd like to give special mention to our tour guide, whose name escapes my memory. He was formerly a monk and has a son and wife. Not sure if that helps identify him, but his English was great and his attention to detail as a tour guide could not be more appreciated. Angkor Wat is undoubtedly beautiful but he enhanced its beauty with all the information he was able to provide. I (a female) was wearing shorts the morning we met him and he had the wisdom to tell me to change into something more conservative since we were visiting a temple. We were so grateful for this, as we would not want to offend anyone or desecrate an ancient holy place. Apparently, many other tourists were not given this advice and we saw many a french and british lady walking around wearing shorts, oblivious to how they must look from a Cambodian perspective. All tour guides should be this honest, especially since as tourists, we travel long distances to appreciate and be humbled by foreign lands and their ancient treasures. Unknowingly offending the locals is something we very much want to avoid!

We tipped our tour guide 20%, which was all the cash we had on us, but if we could have we would have provided a much much bigger tip. Please, if you have the honor of having him as a tour guide, tip him and everyone else you encounter in the town generously. As middle class Americans (note, we are far from the 1% or any of the rich classes for that matter), we often have to cough up 15-20% tips for services in the USA no matter if they are good or bad, but with prices in Cambodia being but a fraction of what they are here, Americans and all others from developed countries can afford to tip amply.

This review is the subjective opinion of a Tripadvisor member and not of TripAdvisor LLC.
MatthewLai_07
Port Klang, Malaysia
1811
Reviewed 19 July 2012
Value for money

I booked through agoda for a price of USD30 per night (breakfast included) and I got this huge room with a living room. Clean hotel, friendly receptionist, and cool swimming pool.

You can hire a tuk-tuk for USD25 per day and the driver will take you to the Angkor Wat archaeological park, Tonle Sap lake, night market, etc.

This review is the subjective opinion of a Tripadvisor member and not of TripAdvisor LLC.
Sima F
Tehran, Iran
13
Reviewed 25 May 2012
comfortable and clean :)

we stayed at this hotel for 5 amazing nights.
the staff are really smiling and helpful.
the room, toilet and corridors were all clean,
breakfast was very good.
the rate compared to other hotel is a bit high, but it worth of it :)
the only problem is the location which is far from town. but by only $2 u can go to old market, night market and pub street.

This review is the subjective opinion of a Tripadvisor member and not of TripAdvisor LLC.
Tom T
San Diego, California
10593
Reviewed 4 May 2012
Outside of central Siem Reap

Stayed here two nights and have no complaints about hotel. We had a room looking out the front of the hotel and it had a small patio to sit out on and watch the traffic. It is away from the main part of town and you have to travel to do anything. There is a night market just down the street if you want to grab some local food. The rooms are quiet and the front desk was quick to help out with a request. There is a basic breakfast buffet in the morning, but get there early as it gets full and may have to wait for a table.

This review is the subjective opinion of a Tripadvisor member and not of TripAdvisor LLC.
Markowy
55
Reviewed 3 May 2012 via mobile
Great stay, luxury getaway

We stayed two nights here. We arrived early on sleeper bus, exhausted! They gave us early check in at 6.30 am to a temporary room for showers etc. They then bumped our room up to an executive suite free of charge. Fantasitic room! Pool is great, breakfast is also great. The restaurant was also nice. Location wise... Its a little out of the city, 20-30 min walk. It is close to Agkor Wat though

This review is the subjective opinion of a Tripadvisor member and not of TripAdvisor LLC.
View more reviews
PreviousNext
1…8910…