Paragon Serviced Suites @ Straits View
Lowest prices for your stay
Lock in the lowest price from these sites
US$36
View Deal
Snaptravel
ZenHotels.com
StayForLong
Prices are the average nightly price provided by our partners and may not include all taxes and fees. Taxes and fees that are shown are estimates only. Please see our partners for more details.
shawnn339
2

Deposit was not refunded even though front desk said it will be refunded. Contacted them via email and till date have not gotten back an answer regarding this. Please beware if you’re intending to stay at this place

Trip type: Travelled with friends
See all 19 reviews
Nearby Hotels 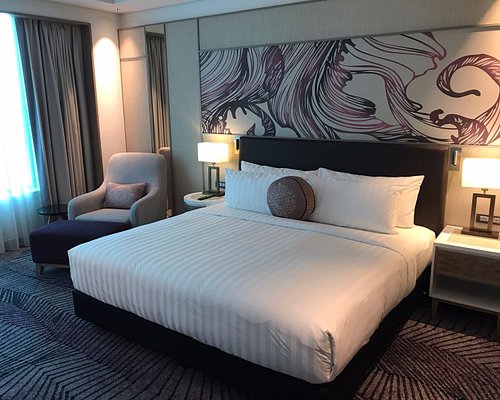 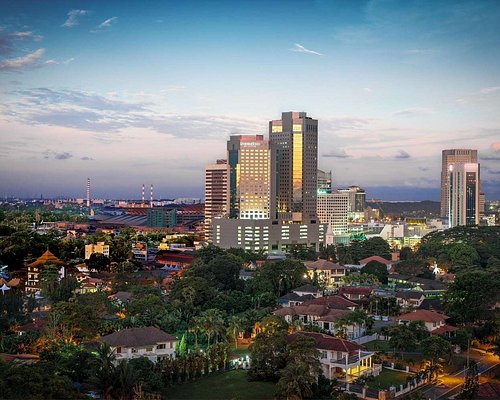 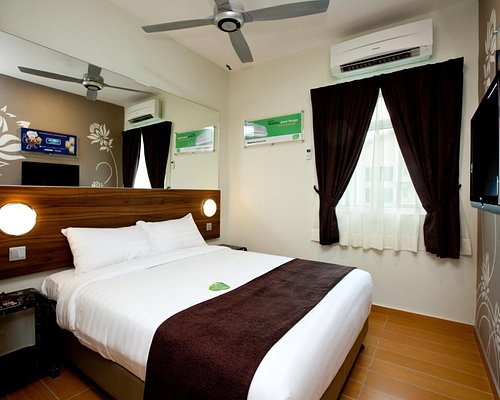 Hotels.com
View Deal
Pay up to 12X
Agoda.com
US$12
Expedia.com
US$12
StayForLong
US$41
View all 14 deals from US$12
1,069 reviews
3.3 km from Paragon Serviced Suites @ Straits View
We compared the lowest prices from 14 websites
Breakfast included
LEGOLAND Malaysia Resort
US$122

Expedia.com
View Deal
Free cancellation
Hotels.com
US$15
Trip.com
US$13
Booking.com
US$16
View all 13 deals from US$13
192 reviews
3.7 km from Paragon Serviced Suites @ Straits View
We compared the lowest prices from 13 websites
KSL Hotel & Resort
US$86

Hotels.com
View Deal
Free cancellation
Pay up to 12X
Expedia.com
US$37
Agoda.com
US$27
Booking.com
US$36
View all 10 deals from US$27
4,257 reviews
4.0 km from Paragon Serviced Suites @ Straits View
We compared the lowest prices from 10 websites
Mutiara Johor Bahru
US$29

Hotels.com
View Deal
Free cancellation
Reserve now, pay at stay
Expedia.com
US$29
Agoda.com
US$27
StayForLong
US$58
View all 14 deals from US$27
807 reviews
3.8 km from Paragon Serviced Suites @ Straits View
We compared the lowest prices from 14 websites
All Inclusive
Pulai Springs Resort
US$37

Expedia.com
View Deal
Free cancellation
Reserve now, pay at stay
Hotels.com
US$37
Agoda.com
US$32
Booking.com
US$41
View all 13 deals from US$32
953 reviews
17.1 km from Paragon Serviced Suites @ Straits View
We compared the lowest prices from 13 websites
Z Hotel
US$32

A large two bedrooms apartment but furnished for two persons, large living room within with kitchen which I don't see any use, there are lots of food in town, or even just 100 meters walk if you want to try out Malay food.
Amenities are almost not used by more than 3 persons, huge gymn, small pool on spacious 6th floor
Rooms are clean and check in or out is simple.
Advisable to have own car for convenient commute as the property sit on a hillside on the city fringe

This review is the subjective opinion of a TripAdvisor member and not of TripAdvisor LLC
Paul M
Bangkok
7553
Reviewed 15 April 2019
Awkward location, check-in process not easy and many faults in room

I did not validate the exact location while booking, so the location issue is my own fault, but this location was far from the city and not what I actually wanted.
The building is huge, making walking to and from the main entrance a chore.
Check-In process was painful. They would not let me access with my car until I had checked in. So I had to park in the street, access the building, go to the reception area, check-in, then go back and move my car to the car park. Took too long and not easy. They made a big fuss about me parking only in the allocated bay. I parked on a floor with around 200 parking bays, Mone was the only car there for two days. Strange to have made such a big fuss.
The condo is nice overall, good furniture spacious and nice views.
However, it had many problems, leaks in the bathrooms, broken bathroom fittings, tape stuck on the mirror, ceiling water stains from leaks above, the kitchen door and the fridge door opened against each other, so the kitchen door had to be closed before the fridge could be opened (yet the door direction can be changed in this fridge).
All round, I will not stay here again.

This review is the subjective opinion of a TripAdvisor member and not of TripAdvisor LLC
fathy5886
Kuala Lumpur, Malaysia
142
Reviewed 13 February 2019 via mobile
Good Apartment Type

This review is the subjective opinion of a TripAdvisor member and not of TripAdvisor LLC
Afie_Roslan
Singapore, Singapore
510
Reviewed 6 January 2019 via mobile
Clean rooms, great views but bad management

1) Park your car in the street outside the property
(Motorbike riders may try ask the guard if you can park inside, we did this and the guard was kind enough to allow us to park by the side of the guardhouse.)
2) Register at the guardhouse
3) Go into the building, up to level 7 to check in.
4) If you are not an obsessed bank account deduction checker like myself, upon check in, you will find that your card has not been deducted. Thus rooms are considered not paid for yet (even though the booking confirmation states that your card will be charged shortly after booking confirmation, it will not be deducted. Apparently the counter staff says alot of people get confused with this,YET the management does not do anything to amend the clause on the booking confirmation email.)
5) Due to no.4, you have to make payment on the spot.
Not knowing this, my main wallet with most cash & my card was left in the safekeeping of my uncle & family in the car, OUTSIDE THE PROPERTY. I am female and petite and did not want to carry too much with me during check in. Brought enough for RM100 deposit and only abit extra.
6) Check in starts at 3pm, I was 6th in line. Served at 3.40pm.
We booked 3units & requested for nearby/next to each other due to safety as we had 1 unit 1 all ladies & 1 unit with children and it was our 1st time there.
No early check in requested.
At 3.40pm we were told our units still not ready yet.
Since I did not bring enough cash to pay for all 3 units on the spot, I paid for deposit & 1unit first as only 1 was ready and we needed to perform our prayers. Couldn't go back down 7 levels to get my wallet to pay for all 3units while there's a queue behind me could I? Was told that they could not process the other 2units next to each other as they will be seperate transactions.
I don't get it. We were already there, we weren't late, booking was already confirmed for 3units next to each other, and the place has my card details for deduction ANYTIME! If the reason to collect card details is to secure our rooms, SECURE THEM THEN! You can deduct if someone is a no-show but you cannot use these card details to hold & secure the rooms if we are present. Just great.
We were exhausted after all the driving around JB since early morning and riding and all of us had to crash in one unit.
7) Go back all the way down & out to get your vehicles and finally enter the premises to park at the allocated basement lots.
8) Upon check in, found our unit's main toilet had a strange pipe sytem where the bidet & flush share one pipe source & control. We have to off the lever when we dont want to use the bidet. By doing this,the toilet wont get water to fill up the flush resevoir. If we want to fill up the flush resevoir, the bidet would be left running. The bidet had no pipe head.
Which leaves us with only the masterbedroom toilet functioning properly for all of us to use.
9) Went to pay for the other 2 rooms at 4.40pm and was told the rooms are still not ready & there are 5 ahead of us in queue waiting for rooms! What?? We heard some groups plan to check in, leave their bulky things to go explore JB with peace of mind not leaving valuables in their vehicles. Their plans failed thanks to the booking system. They were big families with kids & all, mind you. Checking in bulky items would be a necessity for them. And timing would be crucial too. People may have reservations elsewhere, some need to change & freshen up & dress up etc. Poor souls.
10) Went swimming at the pool and my uncle, who was wearing a legit long-sleeved plain grey coloured swimming shirt, was called out by the security as he thought is was a normal shirt?? We had him touch the material and show the brand and explain that they DO make long-sleeved swim shirts for men. Apparently the guard thinks all long-sleeved swim gear for men are only wet diving suits maybe?? My uncle was so close to breaking point by then, after all the hassle with check in, he had to deal with this?? The guard eventually retreated after all the explaining.
11) Finished swimming at 6.20pm and we still have not gotten the call for ready rooms. We planned to leave at 7.30pm for dinner and a night expolration afterwards. Only to return at like 2-3am but reception counter only opens till 1am.
So you can see all the thought we had to put in??? Dear management, YOUR GUESTS HAVE ITINERARIES! You treat us like the only thing we have planned is to wait for check in all day & night long..
12) FINALLY received the call at 6.50pm. No initiative by the management to either offer late checkout or discount or anything at all. Rooms ready nearly 4hours late and no compensation whatsoever.
Our guess is maybe the previous batch of customers faced similar late check-in situations and self-declared late checkouts which leads to late cleaning and much later check-ins for our batch. Wouldn't blame the previous batch if this were the case.
13) Discovered one of the 2 later units that we checked in had the same piping issue at the main toilet. So that's 2 out of 3 main toilets down.

The ONLY good thing was that the rooms were very clean! At the very least, despite all that hassle, we had a comfortable night's rest. Many many thanks to the housekeeping team! Yeayy! Keep up the good work!
A plus is the great views!

Overall, new & modern-looking building & apartments but with not-quite-there-issues. We will not recommend the place, but will not deter others from experiencing it either.

This review is the subjective opinion of a TripAdvisor member and not of TripAdvisor LLC
818Ummy818
Singapore, Singapore
2925
Reviewed 30 December 2018 via mobile
Plans derailed

Booked apartment direct and was sent confirmation after card details were given.
Check in listed at 3pm, arrived at 3.30pm, was informed no deductions were made, so practically had to re-book. After payment made, only 1 rm of 3 ready and were told to wait.
So whole family of 7 had to wait in 1 suite. Toilet issues, the flush in one and the bidet not working in the other.

All tired and planned to rest in the afternoon, especially our designated drivers for the trip but were unable to.
At 5.30pm, went down to the office but told to wait further for housekeeping as we were number 5 on the list. 6.15pm, finally received a call to collect the keys to the other 2 rooms.

It is such a pity as the suite were spacious and clean, good price too.
However, we are never returning as our plans were derailed due to the terrible booking process and poor, slow service.