Review of Avillion Port Dickson
Reviewed 1 week ago via mobile

Trip type: Travelled with family
See all 1,975 reviews
Nearby Hotels Hotels.com
View Deal
Free cancellation
Pay up to 12X
Expedia.com
US$93
Official Hotel
US$50
StayForLong
US$144
View all 14 deals from US$50
1,584 reviews
8.9 km from Avillion Port Dickson
We compared the lowest prices from 14 websites 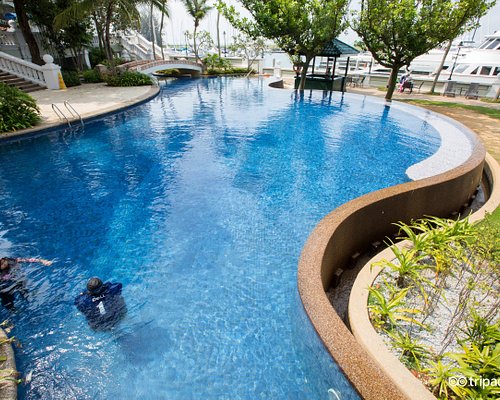 Hotels.com
View Deal
Pay up to 12X
Orbitz.com
Agoda.com
US$34
StayForLong
US$71
View all 13 deals from US$34
968 reviews
3.6 km from Avillion Port Dickson
We compared the lowest prices from 13 websites
Breakfast included
Glory Beach Resort

eDreams
View Deal
Hotels.com
US$54
Agoda.com
US$36
Expedia.com
US$54
View all 12 deals from US$36
386 reviews
6.2 km from Avillion Port Dickson
We compared the lowest prices from 12 websites
27% less than usual
Breakfast included
Klana Beach Resort Port Dickson
US$33

Agoda.com
View Deal
Free cancellation
Hotels.com
US$43
Trip.com
US$33
CheapTickets
US$74
View all 9 deals from US$33
261 reviews
6.9 km from Avillion Port Dickson
We compared the lowest prices from 9 websites
All Inclusive
Eagle Ranch Resort
US$61

Hotels.com
View Deal
Pay up to 12X
Agoda.com
US$42
ZenHotels.com
US$40
Expedia.com
US$61
View all 10 deals from US$40
142 reviews
12.6 km from Avillion Port Dickson
We compared the lowest prices from 10 websites
TSR Seafront Hotel
US$40

Hotels.com
View Deal
Pay up to 12X
Expedia.com
US$40
Agoda.com
US$30
Booking.com
US$44
View all 11 deals from US$30
2 reviews
3.0 km from Avillion Port Dickson
We compared the lowest prices from 11 websites
Breakfast included
D’Wharf Hotel & Serviced Residence
US$35

I have made the reservation in Agoda. I called before the booking no one answered the call. It stated that the bed type (2 single / 1 double) is based on availability. Therefore I made the request for double bed. And I called the property to confirm. But no one answers the call. Then I called the Avilion Group (HQ). A person from customer service tried calling Avilion Port Dickson but no one answered. After 2 days I called the HQ and asked again that "Is the Avilion Port Dickson even exist?" Then they gave me another number which is the front desk's number. One person answered the call and I told him that it took 2 days to contact the hotel. And he was very sarcastic. And immediately asked what is regarding? This happened on 30th Dec 2020 around 11am. I told him that the general number is in Agoda and stated that it's a front desk number and very troublesome for us to contact the hotel as no one answered. Pls put the front desk number in Agoda. He said we are busy that's why didn't attend the general call and in Agoda we put general number. We don't put front desk number.
My concern is whatever number it is it should be contactable not to make trouble for customer to contact.
1. The property put general number in Agoda as Front desk number. And no one answered the call for 2 days.
2. The person who attend the call was so sarcastic. (front desk)

This review is the subjective opinion of a TripAdvisor member and not of TripAdvisor LLC
DarylWongSauYee
Petaling Jaya, Malaysia
57116
Reviewed 2 weeks ago via mobile
AVOID VILLAGE COURT poolside cafe AT ALL COSTS!

CONTINUED FROM MY LAST POST...
4. We finished our meal, and with the last 2 hours experience in the Village Court, we were not so confident that the waiters/waitresses are competent. So we called for one of the waitresses, pass her the CIMB credit card, and reminded her that there is CIMB discount. She acknowledged and left with the card. Usual practice in all 5-star hotels, they will give u the bill to check if all items are correct, before they charge your credit card. But here.. Surprise surprise! They girl just passed my wife her credit card with the receipt straight. If everything is correct, we would still be fine. But upon checking, sure enough, the credit card was charge the actual price without the CIMB 33% discount!! Upon seeing this, we called the other waiter as the waitress could not be found. We explained what happened. He went to the front counter where 3 others were there too, one big sized waiter, the waitress who manned the counter, and the F&B manager, and explained to them what happened. After about 10mins, dilly-dallying, and talking amongst themselves, the big sized guy finally came to our table and he couldn't even explained himself. Cannot speak english is still ok, even in Malay language, he has difficulty explaining to us. And guess what? He told us that the credit card has already been charged the amount, and they cannot give us the discount! What in the world is that??? It's their fault and yet they expect us to not only accept their mistake and be ok with the charges??
At that point, both my wife and me were pissed!!! I told him off. I said we checked and confirmed before we walked in and when we called for the bill, we reminded again. I will not accept this. I told him if he cannot settle this, go get someone who can! He went back to the front counter. Another 10mins passed with no solution, and no one came back to update us the status. I was fuming at this point. I walked over to the front counter and questioned them the status. The F&B Mgr explained that they are trying to solve it. I stood aside and heard him phone called the big sized guy where he was and all. But anyway i called the F&B Mgr aside and told him my whole ordeal and i am very upset with all these. He kept apologising. After waiting up front at the counter for another 10mins, finally they decided to refund the difference in cash. And here comes another joke! They refunded 20% when the correct amount should be 33% for CIMB Visa Infinite! The F&B Mgr clarified with the staff and the staff doubled checked some list in the drawer and confirmed it's 33%. They do not even know their stuff!! The F&B Mgr then said they will send us a complimentary cake to our room. I told them i used to stay in Avillion a few times, but not this trip, and it's not about tje complimentary cake. I don't care about the complimentary. It's about the Service level. Then we walked off, still pissed!

All the waiters/waitresses, including the F&B Mgr needs to be trained! They do not have product knowledge. They have no service standards. They have no professional courtesy.

This review is the subjective opinion of a TripAdvisor member and not of TripAdvisor LLC
liewshuen
Kuala Lumpur, Malaysia
175
Reviewed 4 weeks ago
Worst Experience

I first stayed in this hotel in 2010 and it was a lovely experience. So in support of domestic tourism, I decided to stay at Avillion PD again this month. Booked 2 water chalets and it was the worst decision ever. Room was not well maintained and dirty, lamp was broken, floor was sandy, and the next morning, we had bug bites all over our bodies. Food was extremely bad. I emailed them but there was no reply. Spend your money elsewhere.

This review is the subjective opinion of a TripAdvisor member and not of TripAdvisor LLC
irfan893
Kuala Lumpur, Malaysia
121
Reviewed 4 weeks ago via mobile
not safe

i book my vacation for my family with child and end up with bad experience..i found cockroach in the bedroom..the floor also need to upgrade..many hole and i dont think its safe if my son stay at balcony.. bedsheet also not clean..

My wife arranged for a holiday trip on my birthday as we have been to this resort some years back.We noticed loads of negative reviews but we discounted them based on our previous pleasurable experience and thought that it could have been sheer hard-luck for some or mere exaggerations.
I couldn't have been more wrong when our expectation was shattered into pieces in reality. This is hands down, the worst place I've ever had the displeasure of staying at.
The receptionist was rude and abruptly handed us our keys and told us our room number. Nothing about where to find the said room, any of the "amenities" of the hotel, etc. We went to retrieve our bags and the bellman were no where to be seen. We just wanted to get into our room without an issue. The next thing we noticed was that the Wi-Fi doesn't work in the room. I again return to the front desk and ask if it works in the room. They said it did, but when I went back, again no signal.
The chalet was extremely old and dilapidated. You can see black dirt on the wall and spider web at the ceiling edges. The balcony was falling apart. The furniture we decades old and sticky; a clear sign of no cleaning/wiping. The garden areas were stuffed with trashes. My wife was attempting to take a shower, but the water won't maintain a constant temperature akin of cold shower. Strands of hair were noticeable on the shower floor. The chalet was humid as can be, despite the air conditioning running full blast. The floor was that slick/slimy feeling from the moisture. The bathroom sink and toilet were dirty and when we pulled back the covers on the bed we found hair! We kicked the covers off since we wouldn't be using them anyways due to the humid room and attempt to go to sleep. We tried to use the TV, but it wouldn't turn on.
There was only one power outlet near the bedside so both of our phones, without wifi of course, were plugged into that outlet. Humid and in discomfort, we slept somehow out of pure exhaustion from our day, but it didn't come easy. The breakfast reminded us of our school canteen food. More decent it was perhaps!

We couldn't get out of this place fast enough. So to recap:

No A/C in the room.
No working television.
No Wi-Fi in the room.
No bottled water in our chalet.
No working telephone.
The staff were not hospitable.
Chalet walls that were super dirty.
Dirty sink and toilet.(urine stench)
Shower wouldn't maintain a constant temperature.
F&B, food during bfast were bland and tasteless. Not sure if the taste the food first before serving.

Oh and did I mention the HAIR found in the bed covers&shower floor plus the pool was filled with black slimy dirt and trashes everywhere when I went under
It’s repulsive to think that this place was advertised as a destination. There is a serious management problem at this resort. Noted some replies by the GM assuring improvement but what we experienced indicates all talks but no actions! He should fix the house, get to the bottom of the issues. Avillion is surely taking a deep dive for its condition and services.
Use your money wisely and stay away from any affiliation to this Resort. Spend your hard earned money eleswhere..! Completely horrifying accomodation and stay. Conclusion = believe the in the negative reviews. We did not and yes we paid the price! Horrendous vacation we ever had.