US$148
US$96
View deal
SAVE US$52
Expedia.comUS$134
eDreamsUS$148
CheapTicketsUS$134
View all 14 deals
Prices are the average nightly price provided by our partners and may not include all taxes and fees. Taxes and fees that are shown are estimates only. Please see our partners for more details.
yewthongcc
Sri Kembangan, Malaysia
32

Was here for 3D2N, the resort itself was great, rooms were nice 3-4star standards, magnificent views, nice secluded beach, but the FnB was totally horrendous, very limited spread, breakfast was barely acceptable, disregarding the obscene prices (understandable for its location) quality was poor to average. Can only recommend the pizza.

Considering the only other FnB choices would mean taking a 1 hour trek through a forest to the nearby village or a water taxi to kg. Genting rm80/head/way, I could not bring myself to stay for more than 2 nights. Which is a shame because it was in such an excellent location.More

Show less
Trip type: Travelled as a couple
See all 648 reviews
Nearby Hotels

Breakfast included
Paya Beach Spa & Dive Resort
US$70
Booking.com
View deal
Hotels.com
US$64
Agoda.com
US$47
Expedia.com
US$64
View all 13 deals from US$47
763 reviews
8.2 km from Tunamaya Beach & Spa Resort
We compared the lowest prices from 13 websites 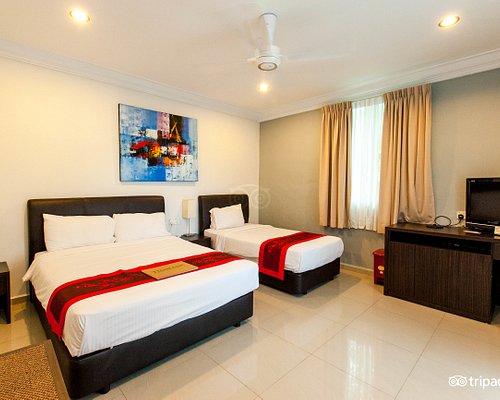 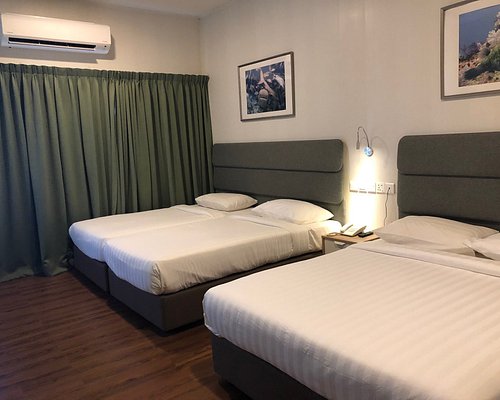 Hotels.com
View deal
Free cancellation
Pay up to 12X
Agoda.com
US$25
FindHotel
US$23
Booking.com
US$39
View all 14 deals from US$23
75 reviews
5.4 km from Tunamaya Beach & Spa Resort
We compared the lowest prices from 14 websites
Breakfast included
Japamala Resort by Samadhi

Booked the sea facing villa for 3d/2n. Room was comfortable and clean. View was breathtaking. Staffs were very helpful and attentive. Special thanks to the resort manager Mr Subra, Jojo , Jayan and Irene. They made the trip really enjoyable. Had their BBQ dinner 2 nights in the row. Seafood was very fresh and BBQed to perfection.
I would recommend this place for a good relaxing holiday. P.S only DIGI line works here.

We booked 3D2N all inclusive and the resort view is breathtaking. Was dissappointed as complimentary upgrade which was advertised, was not available to us even though there are only few guests.

Improvements needed
》 Maintenance. Resort needs more cleaning staff for thier grounds. Rooms a bit outdated. Chairs outside room stained dirty
》 Being isolated, activities and food comes with premium price. We only gets our life jacket on the day we went snorkelling. For some it can be quiet time. For others it could be really boring. Management should review pricing esp activities for guest.
》Internet is bad even for the paid coonection.

Good moments
》 Friendly staff esp one waiter at the restaurant. They really lift up the resort atmosphere.
》 Sceneric view and beautiful sunset. Great for photo taking.
》 Food is good even though its pricey.

Overall the highlight of our trip is out snorkelling. Tioman is beautiful.

This review is the subjective opinion of a TripAdvisor member and not of TripAdvisor LLC
MikeSealey
Penang Island, Malaysia
4410
Reviewed 24 August 2020 via mobile
Beautiful setting

We had a beachfront villa. Very comfortable, clean and quiet. We could snorkel off the beach. Lots of fish life. Staff were extremely helpful and friendly. The food we ordered was very good quality and very tasty. Especially the fresh seafood. You have to make allowances that the resort is on an island and they did not always have exactly what we wanted. However, they would offer a substitute. Tunamaya is quite isolated, so you are not disturbed by people from other resorts. But it is difficult and expensive to get a boat to other places on the island.

This review is the subjective opinion of a TripAdvisor member and not of TripAdvisor LLC
JimmyChuah3336
Melaka, Malaysia
1
Reviewed 17 August 2020 via mobile
Excellent Hospitality Resort

This review is the subjective opinion of a TripAdvisor member and not of TripAdvisor LLC
finnlovestravel
Kuala Lumpur, Malaysia
41
Reviewed 12 August 2020
Decent and average stay

Recently we spent our honeymoon (6D5N) at Tunamaya. With the amount we paid, we definitely had high expectations.

When we arrived at Kg Genting, there was no proper signage or direction for Tunamaya guests. We were wandering around to see if someone is waiting for us but ended up having to call the hotel to check if someone will pick us up.

When we arrived at the hotel, we were not asked to scan and check-in MySejahtera app, and no temperature scan was done as well. We noticed they set up a temperature check table at the restaurant on our second or third day stay, but even that it wasn't properly enforced.

The food selection was very limited and the taste was so-so. The menu is rather expensive for what you get. There was one time we ordered a burger and fish & chips. but no chips were given because it was unavailable. We were only given a couple of pieces of lettuce and that's it! After we asked, they offered us hash browns. Not really suitable but better than nothing. After third day, we were quite sick of the food selection. However, our meals for Romantic Dinner were delicious, so thumbs up for that.

The staff were super friendly but needs a bit more training.

We stayed at Beach Villa Deluxe and the beachfront view is amazing. The room was spacious and comfortable and basic amenities were given in the room.

The whole resort is clean, but they should do beach cleaning once in a while. Spotted trash like beer cans, plastic etc. Obviously people need to stop throwing trash!

Very limited (or none!) coverage of free WiFi at the lobby. However a couple of days before we leave, they have set up paid WiFi connection - 1GB for RM14. So you can get a decent connection, though it will cut off easily.

We didn't get to explore other villages and were stuck at the hotel all the time as the water taxis were expensive - between RM80 - RM150 one-way per person. Even their snorkelling trip is over RM200 per person for 4-hour excursion.

The spa is unfortunately still closed when we were there.

We highly suggest to stock up snacks (A LOT OF IT) and beverages (beers, carbonated) before you arrive.

It's a nice place, but Tunamaya is definitely in need of BIG improvements to become a 'luxury resort'.