We stayed here as part of a trip a deal tour. The accommodation was clean and comfortable and food OK. We took 2 sunrise boat trips and 1 sunset boat trip. We saw lots of animals in the wild.Would recommend this for a 2 night stay.

See all 238 reviews
Nearby Hotels 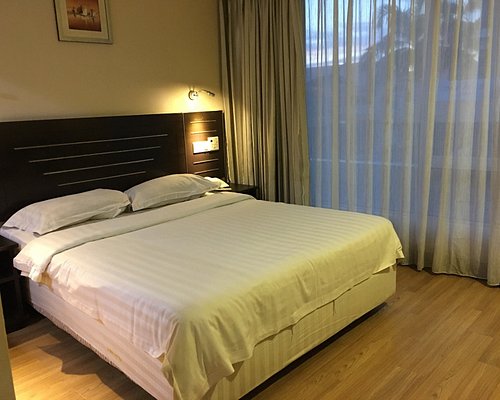 Agoda.com
View Deal
Free cancellation
Reserve now, pay at stay
Hotels.com
US$40
Trip.com
US$38
Booking.com
US$44
View all 11 deals from US$38
32 reviews
46.1 km from Borneo Nature Lodge
We compared the lowest prices from 11 websites

Agoda.com
View Deal
Booking.com
US$42
Hotels.com
US$42
StayForLong
US$92
View all 14 deals from US$37
660 reviews
43.6 km from Borneo Nature Lodge
We compared the lowest prices from 14 websites
Gloria Plaza Hotel Sandakan
US$24

Agoda.com
View Deal
Free cancellation
Booking.com
US$14
Hotels.com
US$17
Expedia.com
US$17
View all 11 deals from US$14
12 reviews
48.5 km from Borneo Nature Lodge
We compared the lowest prices from 11 websites
Breakfast included
Sepilok Jungle Resort
US$39

Hotels.com
View Deal
Free cancellation
Reserve now, pay at stay
Expedia.com
US$39
Agoda.com
US$28
Travelocity
US$39
View all 12 deals from US$28
802 reviews
55.5 km from Borneo Nature Lodge
We compared the lowest prices from 12 websites
Sponsored
My Dream Hotel
US$14

Expedia.com
View Deal
Pay up to 12X
getaroom.com
US$60
Trip.com
US$51
ZenHotels.com
US$56
View all 8 deals from US$51
130 reviews
56.1 km from Borneo Nature Lodge
We compared the lowest prices from 8 websites
Breakfast included
Harbourside Backpackers
US$18
US$17

FindHotel
View Deal
Trip.com
US$18
Expedia.com
Hotels.com
View all 12 deals from US$17
153 reviews
42.3 km from Borneo Nature Lodge
We compared the lowest prices from 12 websites
OYO 1027 Hotel London
US$12

We spent three nights here and it's location is fantastic. From the Lodge we went on three river cruises ( small boats with 6 - 8 POB) searching for monkey's, crocs, birds, snakes and Pygmy Elephants. We managed to get 100's of photo's of everything apart from the Elephants which we only just missed. The accommodation is fairly basic, there is aircon from around 6am to 10pm and ceiling fans the rest of the time. We found this quite adequate and slept well. Our only criticism was the room was dusty and the towels had a real musty smell like they had been rolled up damp and had remained that way for some time. There is no TV so do have a book to read for relaxation times, each cottage has a verandah and outside seating where you can just chill out. The food is good and drinks (beer and wine) can be purchased. There isn't a variety of wines, I think it was Chardonay only but your not really there for the wine are you.
Our boat Captain was great his ability to spot creatures from the boat was uncanny, and we have many great photo's thanks to his expertise. There was also a road trip during the stay to visit Gomantang Caves, which was not a highlight and I have covered that in a separate review. Do keep you windows locked, the long tailed Macaques WILL get inside your room if you don't. Overall, our stay at Borneo Nature Lodge was great and a genuine highlight of our Borneo trip.

This review is the subjective opinion of a TripAdvisor member and not of TripAdvisor LLC
suzannepayne5
Thurrock, United Kingdom
169
Reviewed 25 October 2019
Loved this place

We stayed here for two nights during our Borneo Tour. We were 2 of a group of 23 and as there were only a few lodges we all had the place to ourselves.
The rooms were basic but comfortable. It is not the cleanest place I have stayed, but a little bit of dirt never hurt any one.
The food was the best I experienced during my whole time in Borneo. Breakfast was to die for. The biggest omelettes ever, all freshly cooked in front of you, hash browns, beans, bacon etc, fruit, toast and preserves, juice tea & coffee. Lunch was a soup, two or three choices of a main with rice and salad, fruit and desserts and similar in the evening.
As we were travelling as part of an escorted tour, three mini river cruises were included. Between us there were three motor boats which took us up and down the river in search of wildlife. We saw loads. Proboscis monkeys, long tailed monkeys, hornbills, egrits and eagles. We saw a couple of baby crocodiles and a big beastie. About 20 foot long. Didn't get too close to that one. We were lucky enough to see an orang-utan in the wild, but it was high up in the trees and too far away for photos, But the unmistakable orange was there. The icing on the cake was the elephant. We had almost given up hope of seeing any. They were definitely there as we could smell them and hear them behind the trees crackling the branches as they moved about and they were trumpeting to each other. After about 20 min/30 min a baby displayed its trunk through the bushes, and then a bigger elephant swiped the baby back into trees and came out down to the river bank. It had a drink and munched on the reeds and sprayed water over itself. It was sooo good to see it in its natural environment I almost cried.
There was also a night walk and a night river cruise available at an extra cost. There was not much to do between cruises but it was nice just to sit out on the lodge terraces, or wander down to the jetty and do a bit of fishing with the boat boys. The boat boys did a brilliant job by the way.
I still can't get over the fact that I was lucky enough to visit this place.
Thank you so much to all at the lodge :-) xx

Stayed overnight in a lodge which was a fabulous experience. We had the best time! Experienced a tropical thunderstorm, riverboat adventure, visits to bat caves, orangutans, sun bears, water village and a temple. Trip organised by Borneo tours and incentive travel and was so well organised. Facilities and food at the lodge were brilliant; staff were friendly; couldn’t fault any of it. Recommend a stay here 100%

This review is the subjective opinion of a TripAdvisor member and not of TripAdvisor LLC
scott712016
Mt Martha, Australia
9324
Reviewed 13 October 2019
Ideal location for the five star nature experience

The nature lodge is accessed by boat, The place is tired but the staff and the food were great, The staff at the restaurant were friendly and attentive but the boatman were excellent. They were so good at finding all the animals and birds that we wanted to see. The boat tours are a must do. This was an unforgettable experience.

This review is the subjective opinion of a TripAdvisor member and not of TripAdvisor LLC
Jennah42
Newcastle, Australia
4
Reviewed 11 October 2019 via mobile
Great Tour

Highly recommend BNL for some amazing tours in the jungle. The staff were so friendly and welcoming and our stay was fantastic. Vincent was the best tour guide we have ever met, so smart, enthusiastic and knowledgeable about everything we could possible imagine in Borneo. Highly recommend these guys for a great experience.