Not my kind of place but nothing wrong... - Hatten Place Melaka

Not my kind of place but nothing wrong with it

Really there's nothing wrong with it, it's just one of those generic cookie cutter hotels. Well it's out of the way, the mall downstairs is empty. The lifts to get up to the hotel were often crowded with a long wait (it was christmas time). Breakfast was the usual crowded thing in these big hotels. My partner wanted somewhere with a pool so I thought we'd try that end of town. I prefer smaller hotels with character.
On the positive side, if you like these kind of hotels, the service was professional, the pool good/clean, the breakfast was a huge range, the building and rooms were modern and in good condition.More

Thank you for your feedback. We are glad to learn that overall it was a pleasant stay although you do prefer smaller hotels. At Hatten Hotels Worldwide we have a range of hotels to cater to various traveller preferences. For your next visit, do check out our sister property Estadia which is a uniquely Peranakan themed boutique hotel. We look forward to welcoming you back to Hatten Hotels Worldwide during your next holiday in Melaka.

Report response as inappropriateThank you. We appreciate your input.
This response is the subjective opinion of the management representative and not of TripAdvisor LLC
See all 403 reviews
Nearby Hotels

Swiss-Garden Hotel Melaka
US$80
US$32
Booking.com
View Deal
Free cancellation
Hotels.com
US$33
Expedia.com
US$33
StayForLong
US$80
View all 14 deals from US$32
1,253 reviews
2.7 km from Hatten Place Melaka
We compared the lowest prices from 14 websites 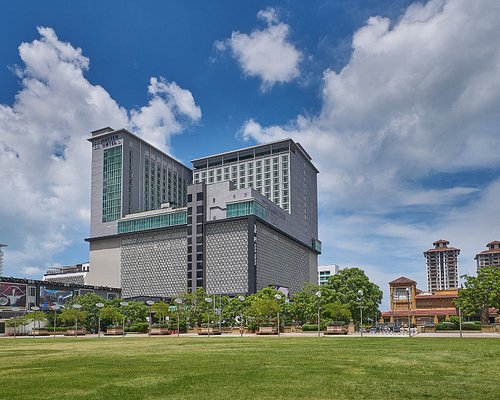 Agoda.com
View Deal
Free cancellation
Hotels.com
US$57
Booking.com
US$50
StayForLong
US$85
View all 13 deals from US$42
3,148 reviews
1.4 km from Hatten Place Melaka
We compared the lowest prices from 13 websites

Agoda.com
View Deal
Hotels.com
US$49
Booking.com
US$28
Expedia.com
US$49
View all 12 deals from US$21
608 reviews
1.3 km from Hatten Place Melaka
We compared the lowest prices from 12 websites
Ibis Melaka
US$57

I happened to not very well physically during my last visit to Melaka. But I thank God for me to meet with some managers of this hotel who truly care for their in house guests. For example, Mr. William Gan upgrade our room to next level is bigger room with king size bed and astonishing view of Straits Malacca. Even though the bathroom door not working well and the room drawer can open by itself. But I still want to thanks William that made me and hubby will always remember Melacca town and it's best sea view from hotel. Miss Abby is another duty manager who desire praise. She went extra mile to get me pads because out off emergency at 4am early in the morning. She was truly helpful. This made me feel safe to stay at Hattten Place in our next visit to Melaka. Well done to others whom I didn't have their, l truly appreciated their helps. Thank you all and God bless you too.

Thank you for sharing your recent experience at Hatten Place. We are glad to hear that overall it was a pleasant stay and hope you are feeling better now. Your kind compliments have been conveyed to both William and Abby for going the extra mile to ensure your stay with us was a memorable one. We look forward to welcoming you back soon.

Report response as inappropriateThank you. We appreciate your input.
This response is the subjective opinion of the management representative and not of TripAdvisor LLC
NazirTraveller
Kuala Lumpur, Malaysia
185
Reviewed 15 March 2020 via mobile
Super Excellent Staycation

5 star hotel that you can afford for world heritage location
Recommended for all travellers and tourist local and abroad
Clean place and room
Great bathroom, great city, sea view and 360 skydeck view, spacious room,
Big tv screen, comfortable bed with best ever sound system on tv,
Friendly staff and very nice and tasty local and continental breakfast and dinner was so good

Thank you for your review. We hope that overall it was a pleasant stay and look forward to welcoming you back soon.

Report response as inappropriateThank you. We appreciate your input.
This response is the subjective opinion of the management representative and not of TripAdvisor LLC
HGGOH
Melaka, Malaysia
32
Reviewed 11 March 2020
Event

Thank you for your review. We are delighted to read that you had a pleasant stay with us and everything from the room and event services has catered to your needs. Your kind compliments have been conveyed to Ms Kavita and her team and we look forward to welcoming you back to Hatten Place soon.

Report response as inappropriateThank you. We appreciate your input.
This response is the subjective opinion of the management representative and not of TripAdvisor LLC
TheKenno
Singapore, Singapore
1712
Reviewed 6 March 2020
CNY @ Hatten Place

It's a really nice family-oriented hotel. It's a little out of the way but they do have a frequent shuttle bus to the centre where the action is. They are close to the Portuguese Village food centre which is ace and they also have a unique gig themselves being the tallest building in Melaka and having a sky-park walk-way, bar and couple of neat restaurants. The hotel is also on top of a shopping centre which is a little deserted but still, we found a few things in there for the kids. We had a few issues with it being CNY and being so very busy at breakfast, zero taxis and/or shuttle-bus so we were 'hotel-locked' but that is CNY for you, great Korean restaurant a minute walk over the road. For the $ it is a great value place, just don't expect to pop to Jonkers, it's a bit of a jaunt but therein lies some adventure.

Thank you for taking the time to share your CNY holiday here at Hatten Place with us. We are glad that despite the holiday hustle and bustle, overall it was a pleasant stay and that you managed to explore the sights of the city from Sky Deck. We look forward having you stay with us again soon.

Report response as inappropriateThank you. We appreciate your input.
This response is the subjective opinion of the management representative and not of TripAdvisor LLC
yudanih
Bali, Indonesia
4128
Reviewed 6 March 2020 via mobile
AC temperature

Our room was on the 19th floor, 1925. Room is decent although it’s not spacious. Melaka is hotter than other part of malaysia, that’s what I’ve been told. I called the operator to send someone to fix/reset the AC as it was extremely hot. The set when we came in was 29 degrees and when a staff came in, he said and seen that he was doing something, however after been an hour in the room, there was nothing changed. Then I called the operator again and explained that there’s no temperature changes since the last guy fixed it. Another staff came in and he was seen to be changing the setting, and explained that because of the room location, it’s bound to be hotter, but eventually will get colder at night. We went out for dinner in town, then when we got back around 11.30 pm, the temperature was still the same when we left. And I was too lazy to call someone, as I have done twice earlier and nothing changed. Then we decided to check out the next day. The point is, we have called for help and wish that the problem have been corrected on the second time we called?.

Thank you for sharing your recent experience with us. We sincerely apologise for the discomfort and have shared this with the team to check on the room in question and ensure it is duly rectified. We hope you will allow us the opportunity to create a better experience for your in future.

Report response as inappropriateThank you. We appreciate your input.
This response is the subjective opinion of the management representative and not of TripAdvisor LLC
View more reviews
PreviousNext
12…68