Apa Kaba Home & Stay
Lowest prices for your stay
Lock in the lowest price from these sites
US$12
US$11
View deal
PricelineUS$12
Agoda.comUS$11
Prices above are provided by partners for one room, with variable occupancy rules as provided by the property, and do not include all taxes and fees. Please see our partners for full details.
Thewildplanet
Switzerland
3334

Staying at Apa Kaba provides an experience of living in a old style wooden kampong (village) house among the local kampong community. Reminds me of the olden times.

Responsive owner (Kenny) who answers quickly to my last minute booking. He is helpful too in explaining to us the route to town.

Although room is basic, it is clean and air-conditioned, and comes with hot water. Price is very affordable too.

Very accessible to Bt China, and Jonkers Walk. There are parking spaces within the homestay.

Overall, a good place to stay.

Trip type: Travelled with family
See all 177 reviews
Nearby Hotels 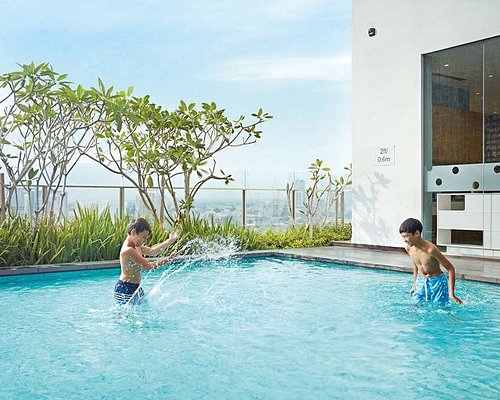 Top Rated
DoubleTree by Hilton Hotel Melaka
US$60
US$48
Booking.com
View deal
Free cancellation
Priceline
US$48
Hotels.com
US$48
FindHotel
US$60
View all 16 deals from US$48
645 reviews
1.4 km from Apa Kaba Home & Stay

Expedia.com
View deal
Pay up to 12X
Hotels.com
US$15
FindHotel
US$10
Priceline
US$20
View all 14 deals from US$10
45 reviews
9.1 km from Apa Kaba Home & Stay
We compared the lowest prices from 14 websites
Hotel Sentral Riverview Melaka
US$24

Linda, the owner, and her family and staff are absolutely wonderful! She told me that this was her husband's family's home for several generations, and when he inherited it, they decided to turn it in to an inn. Self-served breakfast includes both Western and Malaysian home-cooked treats, toast and jam, coffee, tea, etc. There's a stocked fridge and shared computer that you can use, too. Be sure to check out the guinea hens and chickens in addition to the lovely sitting area outside. Bicycles available for rent. Rooms are clean and simple, and beds are comfortable. I opted for a room without air/con, and though the shutters wouldn't open and curtains stayed pretty drawn, the room stayed quite cool. Walls are pretty thin, as this is an old wooden home.
The location is something to either really love or really not--Apa Kaba is about 15 min away from Chinatown and the big sights and museums. Apa Kaba is in more of a typical neighborhood and away from the tourist hordes, and you'll have a very unique, relaxing, and fun experience staying here. I'd say it's worth the walk, even if you're only in Melaka for a day or two.
Highly recommended for couples, friends, families, and solos who like to stick to themselves.

This review is the subjective opinion of a TripAdvisor member and not of TripAdvisor LLC
doaks80
Melbourne, Australia
1110
Reviewed 22 January 2017
Cheap and centrally located -- but must go for the aircon room!

It is located in a warren of alleyways that would be difficult to find without some prior direction - thankfully it seems fairly well known by taxi drivers, and I had no problems getting a taxi there from Sentral bus station.

It is a true homestay, in a fairly old, rustic Malaysian house. Think creaky wooden floorboards and a shared kitchen. I had a room with an ensuite and air-con. I would say this level of room is essential, as the weather in Melaka is extremely hot and humid, noticeably more so than cities further north. The aircon rooms are also set back from the little street which can have noisy scooters going up and down it regularly. It is a little bit more expensive, but still cheap by most standards. The host is very helpful and will assist with maps and advice on where to go and eat etc.

Breakfast is a shared kitchen affair, very simple (think white bread toast and jam with some fruit and tea), but a reasonable way to start the day. It will be a bit cramped however if a large number of guests all want to east at the same time.

At first I thought it was not that well located, being a bit of a stroll from the Jonkers St area. However I learned this was actually a blessing, and it is in fact very centrally located taking into account other important areas. I found Jonkers St to be a horrible tourist trap aim at selling incredibly overpriced food to Westerners and Singaporeans - the only such place I found in Malaysia. No locals eat there, it really is just a tourist attraction. I would recommend walking through there once to see it, but then going elsewhere to explore and eat.

The other areas this homestay is central to is Chinatown and Little India to the North-West (on the east side of the river going North). There I found the kind of authentic, packed-with-locals eateries I had come to expect from Malaysia, with normal local pricing. To the South-East is the "new" area with modern department stores, and more decent food outlets, although a bit more expensive than Chinatown, but still very good. To the South-West is an area where you can find more Malay style dishes. Immediately West is the main historical sites based around Dutch Square.

Note that "Nyonya food" is completely commercialized as a tourist draw, and expect to pay a premium for it almost everywhere you go, especially in Jonkers St. In reality, much of it is unauthentic rip-off that may not be anything like the genuine cuisine. You are probably better off just going to local Chinese, Indian or Malay eateries and finding the food the locals eat is similar in many ways, and much better and cheaper. I had some amazing chicken rice-balls at a Chinese restaurant in Chinatown that was not advertising it as Nyonya food. So be willing to do some walking and exploring!

Room tip: aircon room is essential, and is also set back from road and a bit quieter
Ask doaks80 about Apa Kaba Home & Stay
1  Thank doaks80

This review is the subjective opinion of a TripAdvisor member and not of TripAdvisor LLC
Oliver R
Sydney, Australia
71
Reviewed 14 January 2017
Just lovely!

Very clean homestay with super friendly host. Cheap rooms in a historic house surrounded be a quiet green gardenaway from the hectic of the town. Breakfast and WiFi is included and it's only 5-10 minutes walking from major sights, malls and regional buses. Very recommendable!

Very nice family owned hostel. Breakfast comes with different local food every day to try! It has fantastic garden place to hang out. It's in a quiet area, but still in walking distance to melakka town. Rooms were big and clean. We would stay here again.

Nice and tidy rooms and a beautiful garden. Good breakfast and cheap cold drinks. Very friendly and helpful family and staff. Ten minutes to walk to the sights of Malacca. Best price for a beautiful and cozy place like this.