“Excellent house on Aitutaki”
bG1mXzEyX3Mwdw==
other travellers have booked this property 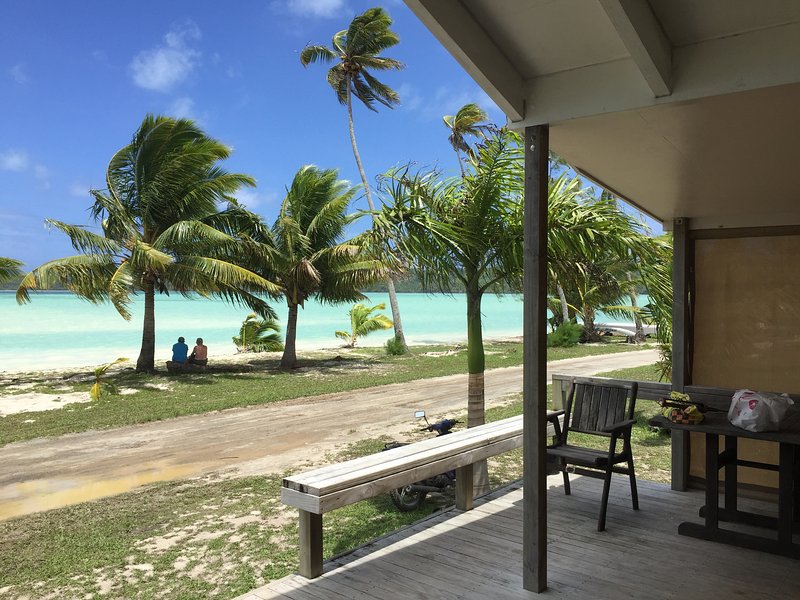 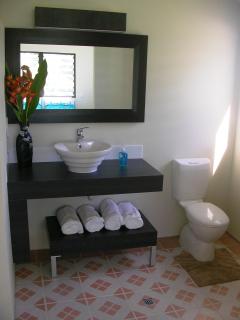 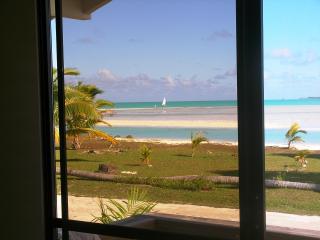 Excellent - based on 54 reviews
Write a Review

Our family travels frequently, and we like to stay in multi-room accommodation, which often means self-catering. So, for our trip to Aitutaki we booked the Aitutaki Ootu Villa based on good reviews and we weren't disappointed. In short, this is a really nice property to stay in, and all the cons I've listed are minor in the scheme of things.

We were met at the airport by Rima, the caretaker, who immediately adorned us with flower leis, put our suitcases in her truck before we could get to them, worked with the Popoara rentals people to coordinate picking up the hire car we'd booked.

We then drove to the house, which is relatively close to the airport (still 3 km driving), where Rima had chilled coconut water and bowl full of tropical fruits waiting for us. We had forgotten to pack a bathing suit for our 4.5-year old daughter. Rima rang around to find a shop that would have a bathing suit for her, and convinced them to stay open long enough (it was closing time) for us to drive there and pick it up. And instead of giving us directions, Rima drove there (8 km one way) and we followed her. After that she took us to a local shop where we could buy groceries. Whilst we were shopping she insisted on buying ice cream for the children. Wow, what a star! She really made our stay special, as did everyone we came in contact with.

The house is very new and built to a good standard. It's built up on stilts with a breezeway underneath, which, among other benefits, helps keep the house cool and with pest control.

There are three bedrooms, but one of them was locked during our stay because we only "needed" two bedrooms. This is a minor annoyance, but we rented what was advertised as a three-bedroom house but only two bedrooms were available. Of course, we probably paid less by not having access to all three bedrooms, but it should have been made clear to us when we were booking it.

All bedrooms, plus the kitchen and living room, had ceiling fans which were a god-send.

There were two bathrooms, one en-suite and the other in the hallway. All were built to a good standard with good fixtures and fittings.

The kitchen had all the pots, pans, dishes and utensils you could need, plus tea, coffee, milo, salt and pepper were provided. The cooking was with LPG (gas), thankfully not electric. We were able to cook all the meals we wanted to, which was really nice when travelling with kids. It's worth noting that we had a minor ant problem in the kitchen. They were tiny ants looking for food, and there weren't that many of them, but you really had to keep the kitchen clean. It wasn't that big of a deal.

There was a nice new flat-screen television in the living room that got one channel. Or maybe we didn't know how to work it. This channel alternated between NZ news, ESPN, old movies and some other stuff. Either way, we didn't come to Aitutaki to watch TV so we didn't care, but if you're a TV watcher then bring your own DVDs!

The house was equipped with wifi, but you have to pay NZ$0.25 per megabyte of internet usage. I went into the Internet Explorer settings and disabled automatic picture and animation loading, and we used the internet sparingly. In the end, the charge was $5 for the three days we were there.

For those of you who want a tropical holiday but also like to beat the heat with air conditioning, you're out of luck. In the Cook Islands, you don't really find much AC outside of resorts, so it's not a standard thing, and electricity is expensive so I can understand. But my goodness was it HOT. I had trouble sleeping some nights because the breeze died down and I just lay there sweating. A knock-on effect is that you had to keep the sliding glass doors open all the time during the day or the building would heat up like a greenhouse. This meant you couldn't lock the house if you went out during the day lest you come home to an inferno. In the end, we just said no worries, left the doors open and trusted our fellow Aitutakians not to steal from us, and we weren't disappointed!

A washing machine was provided, which was really nice to have. It's worth noting that there was no clothes dryer. Again, not something you would necessarily expect to see, but it would have been nice to have one. A clothes drying rack is provided, but in the humid air of Aitutaki clothes don't dry that well. After 24 hours they were still damp. Again, not a huge deal.

If you want to know exactly where the house is, it's at 18°50'52.01"S 159°45'36.63"W, about 50 m NW of Samade on the Beach. As of today (May 2012), it is not shown on Google Earth (too new). The house is 35 m from the lagoon at high tide, and there is nothing between the house and the lagoon except a dead-end dirt road that gets maybe 20 cars a day. So, I wouldn't call it "absolute beachfront" but it's close enough. Within easy walking distance are the restaurant/bar for Samade on the Beach (www.samadebeach.com, 50 m) and the lovely Koru Cafe (www.korucafe.biz, 450 m), but not much else. If you want to walk a bit further, it's about 700 m to the ferry landing for the Aitutaki Lagoon Resort and Spa (www.aitutakilagoonresort.com), and the same distance to the Boat Shed Bar and Grill.

Pros
+ House relatively new, built to a good standard, all fixtures and fittings in good repair
+ Comfortable beds in the bedrooms
+ You get a decent breeze through the house and all windows have flyscreens which work well
+ Great to have a clothes washer
+ Internet (wifi) is available, but at a cost (25 cents per Megabyte)
+ Free local calls
+ Location pretty much on the lagoon, with some eating nearby

Date of stay: April 2012
Liked best: Friendliness of the owners, great condition of the property, and decent location
Liked least: Lack of aircon (picky I know)
Travelling group: Family with Young Children
Your age range 35-49
Would you recommend this hotel to a friend?   Yes.
Recommended for:
Was this review helpful? Yes
This review is the subjective opinion of a TripAdvisor member and not of TripAdvisor LLC
Problem with this review? Thank you. We appreciate your input.

Arrival and departure went smoothly. Rima, looking after the property for Richard/Nora was both lovely and helpful, as was her Aunty. The place is excellent, very clean, modern and the fridge beebs if the door is left open which is great for our fridge mad toddler. The plywood floor is a unusual but appropriate look and great for sand management. Open the backdoor and font 3 slide doors for breeze cooling. The mosquito screens keep the bugs out and the screen on the back door is lockable. We went end of March/start of April and mozzies and heat were fine (we were a bit worried). Is it the most beautiful place on the island? Too hard - the island is ridiculous. It's one of the more beautiful places we've stayed. For a family that needs more space/rooms with excellent view, comparable $$, stylish accommodation and super safe location this is tops.

We had breakfast most mornings at Koru Cafe, drinks and snacks at The Boatshed and take away dinners from Samade. The Samade crowd are an interesting bunch, conversations about the scarcity of mixers when buying cola started to wear away at my holiday permagrin.

We hired a cool buggy from P.... Rentals at The Boatshed and cruised around the island. A scooter or car was necessary to get around.

Date of stay: March 2012
Liked best: House layout and location
Liked least: Big window and no curtains at the front of the house feels a little exposed at night time
Travelling group: Family with Young Children
Would you recommend this hotel to a friend?   Yes.
Recommended for:
Was this review helpful? Yes
This review is the subjective opinion of a TripAdvisor member and not of TripAdvisor LLC
Problem with this review? Thank you. We appreciate your input.

We had a wonderful time taking a long needed vacation. This recently build home was clean and modern. It is steps from a great swimming spot and walking distance to bars, internet and restaurants. Our Aitutaki hosts were gracious and took care of any of our needs even helping us gather groceries from several of the local markets. We will be back!

Date of stay: December 2011
Liked best: Location on the lagoon
Liked least: Make sure to bring your 80% deet bug repellent. If you don't the mosquitoes will thank you.
Travelling group: Family with Young Children
Would you recommend this hotel to a friend?   Yes.
Recommended for:
Was this review helpful? Yes
This review is the subjective opinion of a TripAdvisor member and not of TripAdvisor LLC
Problem with this review? Thank you. We appreciate your input.

great location and support from the manager. Beautiful inside and out.

Date of stay: November 2011
Travelling group: Family with Young Children
Would you recommend this hotel to a friend?   Yes.
Recommended for:
Was this review helpful? Yes
This review is the subjective opinion of a TripAdvisor member and not of TripAdvisor LLC
Problem with this review? Thank you. We appreciate your input.

Melbourne
Reviewed 30 November 2011 for a stay in November 2011
Date of stay: November 2011
Would I recommend this holiday rental to my best friend?
Recommended for:
Was this review helpful? Yes
This review is the subjective opinion of an individual traveller and not of TripAdvisor LLC nor of its partners.
Problem with this review? Thank you. We appreciate your input.
Previous Next
1 … 8 9 10 11 12
Updating list...
Do you own a holiday rental? List it here.

Looking for a place to stay in Aitutaki?
View all 5 holiday rentals