Poor quality with only one decent staff... - Heritage Inn Yosemite/Sonora

US$170
US$149
View deal
SAVE US$21
PricelineUS$170
Expedia.comUS$156
eDreamsUS$170
View all 17 deals
Prices are the average nightly price provided by our partners and may not include all taxes and fees. Taxes and fees that are shown are estimates only. Please see our partners for more details.
michellefF1106LN
2

Poor quality with only one decent staff member

I have stayed here a few times (mostly due to having to after the first time) the evening desk woman is awesome accommodating and great customer service which is a by I was ok with 1 star.
However, the place is dirty, I am sure people are living in the parking lot, rooms are crap TVs crap most time the air or heater doesn’t work right. They don’t clean your room on multiple night stays and have kept my deposit every time for no reason and always wanted to send me to speak with someone else because no one ever knew 3 times they have kept 100$ deposits and being that it happened once I left the room even with trash taken out perfectly clean. It is one of the worst hotelsMore 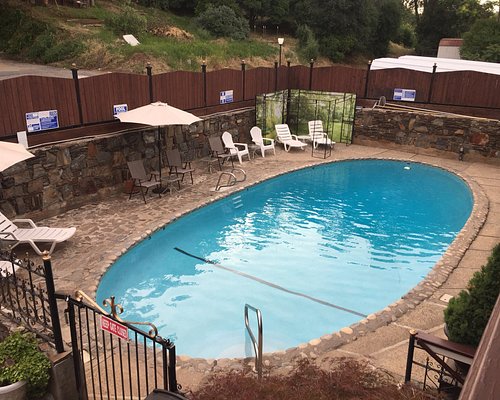 Breakfast included
Sonora Inn
US$239
US$219
Booking.com
View deal
Free cancellation
Hotels.com
US$219
Priceline
US$219
getaroom.com
US$239
View all 18 deals from US$219
179 reviews
0.4 km from Heritage Inn Yosemite/Sonora

The manager, Ginger, treated my son and me like substandard citizens. We experienced worse customer service and even harassment. While I was out of the room for roughly 3 hours, my teenager was harassed inside the room by Ginger.
She peered through the window and yelled at my son; disturbing behavior made him feel unsafe. The constant phone calls from the about the same things (dogs and smoking) would not stop. She kept complaining about our dogs, which were secure and cared for the entire time. My dogs have not been alone in the room; either my son or I was with them, and they were on leashes. There were also a lot of other large dogs there, including pit-bulls. Gingers' complaints were about a short period I was gone due to an appointment. However, the story my son told me did not match in any way to the greedy manager's accusations. The room was a wreck when we checked in; it was hard to find a working outlet to plug anything. The internet sucked, and the ironing board was in pieces on arrival. Regardless of the room's condition, it was the manager and her heartlessness, dishonesty, and shady business practices that were the problem. When I called the motel to speak about the bogus charges, Ginger stated she did not have time to discuss them and did not have to. That was the first time she hung up. I then called back and asked for the owner's phone number and was hung up on several times. Ginger felt like she had the freedom to overcharge and put bogus charges to steal money from that organization. (I did let the organization know in the future not to use that location and about Ginger's dishonesty regarding the harassment and extra charges). Ginger had an elitist attitude that led her to treat us as less than. I've been around the world, and this is by far the worst customer service experience I've ever experienced. If I were able to contact the owner directly, I would not have left this review. We ended up going four days early, but Ginger attempted to charge the organization for the days after we checked out and the bogus charges. Ginger is unethical and dishonest, and frankly terrifying to children. If the manager is replaced or this situation is made right, I would be happy to delete this review of the manager's apparent problem. Ginger was the grinch who stole our Christmas.

Heritage Inn Yosemite/Sonora is a great value for the stay. We were in room 300 for three nights. The room was very clean and updated. The beds were very comfortable. The road noise was sometimes great white noise. At other times it was disturbing. Bring ear plugs. I had read in other reviews that their room keys would stop working. This happened to us. The night we checked in, all was well. The second night, we returned around 11pm, and both keys did not work. Trip to the office and two new keys later, we went to bed. The rest of the family waiting on me to return were freezing outside. When we returned to our room third night, our keys did not work AGAIN. We do not understand this, and it’s unacceptable! The hotel HAS GOT to fix this.

This place is disgusting. As soon as you open the door, the smell of dirt hits you. The TP is dusty. I took a shower and forgot my soap on the counter...so I scooted on my towel to the counter to get my soap...the bottom of the towel was BLACK after that. The floor was so dirty. There is a chair in the room, with a coating of dirt. When I got back home my family told me how bad I smelled...they described what the room smelled like. Old and dingy. I could not iron my scrubs for work the next day, not only was the ironing board covered in dirt, but the iron itself was leaking water everywhere. Oh but they do offer room coffee and tea....my pot was dirty and my tea bags were opened. Buy hey. The only nice thing I can say is the guy at the front desk was so nice. He had the mannerism as if this place was the best 5 star hotel in America lol

Run down and smelly. Old TV that we couldn't use past 11 because the power went off.
Staff "forgot" to inform us that there was a planned power outage (48 hours without electricity) for the whole city of Sonora. RIP-OFF!!!
I understand that it is not in their hands but they need to be fair and offer a cancellation.
Staff wasn't wearing masks.

This review is the subjective opinion of a TripAdvisor member and not of TripAdvisor LLC
Brian T
Washington DC, District of Columbia
233
Reviewed 5 September 2020 via mobile
Zero out of 10!

Stop! Do not book this location. Sleep in your car before stepping a foot on this property.

Ignore this warning if you enjoy all your clothes smelling like cigarettes, skanky disgusting rooms that are filthy and drugged out tweaker’s stalking around the entire premises.

This is not an exaggeration. I couldn’t get a refund but I left anyway because this property is fowl beyond description.

You have been warned.