“Nice Cabin, might stay there again”
VjN1XzQ5X1Rleg==
other travellers have booked this property 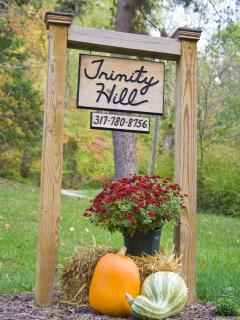 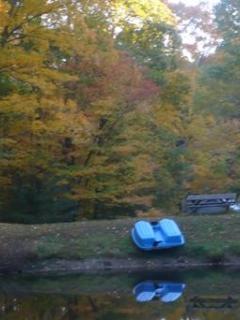 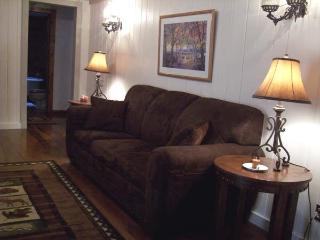 Very good - based on 18 reviews
Write a Review

8 helpful votes
“Nice Cabin, might stay there again”
Reviewed 4 February 2017 for a stay in January 2017
2
people found this review helpful

We stayed at the Trinity Hill Cabin 4 night in late January. Not having been to the area before we arrived late in the dark and made the mistake of using a GPS, which directed us to an area north of Nashville. So use the directions supplied by the owners, not your GPS.

There is some occasional road noise as the cabin faces route 165 but is not a problem. It's still very secluded, especially on the back side of the cabin where the hot tub, picnic table and grill is. The back bedroom has easy access to the hot tub through a second back door on that side of the cabin.

It is a very nice clean cabin, nice hardwood floors and tiled kitchen, kitchen well equipped, but make sure you bring your spices as there are none. Plenty of linens and towels, paper towels, toilet paper and soaps. There are two separate bedrooms with bathrooms and queen sized beds. Also a fold away sofa couch bed in the main room with the fireplace.

There is a satellite TV with DVD player and a couple of dozen descent DVDs, cards and some games. We brought our own movies and plugged into the HDMI port on the TV.

One of the main reasons I chose this cabin was for the stone wood burning fireplace, which we used a couple of times. However it is quite smokey and we stopped using it. The owners provided some wood and we brought some with us also and had the same smokey results with both. I am not a fire place expert but I have used a few wood burning fire places before and didn't have the smoke issue. For some reason, some of the smoke rolls out the top front of the fireplace. I am guessing maybe it is some issue with the firebox design or the chimney is not high enough or something, not really sure, but it was a little disappointing.

There is a winery down the road and three more in Nashville. We visited all four, did the wine tastings and ended up with a half dozen bottles of wine. Quite a wide variety in wine styles, the closest winery in Nashville had some very nice dry reds.

Cell service is very weak. I could get 1 bar of 3g service in the hot tub and in the corner of one bedroom, so if you need internet access, you will have to go into town.

Temperature in the cabin is a very consistent 70 to 72 degrees, as there is a programmable thermostat that is locked out. I would have preferred a couple of degrees warmer, but is was not bad.

Date of stay: January 2017
Would you recommend this hotel to a friend?   Yes.
Was this review helpful? Yes
This review is the subjective opinion of a TripAdvisor member and not of TripAdvisor LLC
Problem with this review? Thank you. We appreciate your input.

Loved the secluded location was very close to downtown Nashville,the amenities were great loved the hot tub and the paddle boat would of gave it 5 out of 5 stars but the fireplace doesn't work very well at all flue has problems other than that perfect cabin

Date of stay: January 2017
Your age range 35-49
Would you recommend this hotel to a friend?   Yes.
Was this review helpful? Yes
This review is the subjective opinion of a TripAdvisor member and not of TripAdvisor LLC
Very nice review, Thankyou. The fireplace is not the typical fireplace. The smoke has to go up and then back and then up again before it goes up the chimney. Because of that the wood needs to be leaned up against the back of the fireplace and then the fire must be started immediately with as little smoke as possible. This will draw the smoke up the flue. The flue is fine. It is just temperamental.
This response is the subjective opinion of the management representative and not of TripAdvisor LLC
Problem with this review? Thank you. We appreciate your input.

We arrived on Friday soon after 4:00 pm. The cabin was warm and decorated for Christmas...beautiful! We chose the bedroom with the door to the hot tub. We got to sit in the hot tub one day while there were snow showers! ☺️ We ate in every meal after shopping at the IGA. The kitchen had all the necessary utensils. We did have some trouble with the fireplace smoking some, but it's an old cabin with an old fireplace so that was not unexpected, and did nothing to take away from our wonderful time there. We enjoyed just relaxing and being away from it all. Thanks again to Jim and Jan for opening up their cabin!

Date of stay: December 2016
Was this review helpful? Yes
This review is the subjective opinion of a TripAdvisor member and not of TripAdvisor LLC
Problem with this review? Thank you. We appreciate your input.

1 review
“Great Layout inside and outside of the cabin entertained us.”
Reviewed 29 October 2016 for a stay in October 2016

The bedroom and bathroom layout were great for a two bedroom and two bathrooms cabin. Every thing was clean. We couldn't find any internet and cell phones didn't work. The cabin comes with a shelter with a fire pit. There is also a pond with paddle boat.

Date of stay: October 2016
Travelling group: Friends
Your age range 50-64
Would you recommend this hotel to a friend?   Yes.
Was this review helpful? Yes
This review is the subjective opinion of a TripAdvisor member and not of TripAdvisor LLC
Problem with this review? Thank you. We appreciate your input.

great location close to brown county state park and close to Nashville, cabin had a home feel to it has a small lake and paddle boat. it could have been a little cleaner.

Date of stay: September 2016
Liked best: location
Travelling group: Friends
Would you recommend this hotel to a friend?   Yes.
Recommended for:
Was this review helpful? Yes
This review is the subjective opinion of a TripAdvisor member and not of TripAdvisor LLC
Problem with this review? Thank you. We appreciate your input.
Previous Next
1 2 3 4 5
Updating list...
Do you own a holiday rental? List it here.

Looking for a place to stay in Nashville?
View all 101 holiday rentals