Overall Impressed - Aweigh From It All | 2300 ft from the beach | Dog Friendly, Private Pool, Hot Tu

Review of Aweigh From It All | 2300 ft from the beach | Dog Friendly, Private Pool, Hot Tu 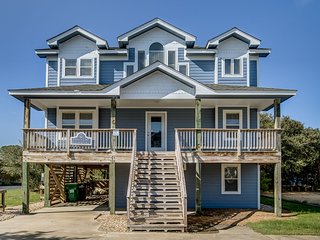 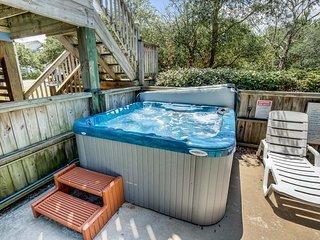 Very good - based on 10 reviews
Write a Review

Philly
Reviewed 19 July 2013 for a stay in June 2013
Date of stay: June 2013
Would I recommend this holiday rental to my best friend?
Was this review helpful? Yes
This review is the subjective opinion of an individual traveller and not of TripAdvisor LLC nor of its partners.
Problem with this review? Thank you. We appreciate your input.

"Aweigh from it All" Corolla, NC
This property itself has a great location and features. The service we received from the rental company Outer Banks Blue was less than poor, it was awful. When we arrived at the property we were about 45 minutes early to check in, I called and they told me that there wasn't anything they could do that we would just have to "hang out, outside" until our code worked. When we did get in the first floor toilet was not working. My husband who is not a plumber, looked inside the lid and said it was a simple fix. We called the rental company right away, on Saturday they sent someone out, he said they were going to have to call a plumber. We also told him about a few lightbulbs that were out outside, he didn't have anything with him and had to return later that evening, came back and didn't have enough light bulbs, said that the owner didn't care about the property, he had made a list that was ignored. Sunday - no plumber. I emailed the owner he had someone call me. They did, said we would be first on the list Monday morning....Monday 1:30pm still no plumber, no toilet....emailed the owner again. Finally someone came out fixed the toilet around 5pm Monday night. The first guy never did return to take care of all the light bulbs outside...Wednesday we are out at the pool and we smell something horrible...a septic pipe has burst and is overflowing into the street right in front of the pool...we then had to deal with a pump tank, back hoe and a bunch of men out by the pool for an entire day. I contacted the rental company upon our return about a refund for all our trouble, Bill at the rental company said sorry you are out of luck, we fixed your problems....doesn't matter to them that they were not fixed in a timely manner or that we were not satisfied. I let the owner know, but I warn you if he is still using Outer Banks Blue realty I would NOT RENT!!

Date of stay: June 2013
Liked best: Location
Liked least: Service from Rental Company
Travelling group: Extended Family
Would you recommend this hotel to a friend?   No.
Was this review helpful? Yes
This review is the subjective opinion of a TripAdvisor member and not of TripAdvisor LLC
Ms. Cooke,
Thank you for taking the time to post your review of this property and allowing us to respond.

As you are aware we responded to every call you made promptly, and fixed each issue you raised, but you were not satisfied.

Yesterday you spoke to our rental manager and hung up on him when he said he was sorry. Your exact words were "no you aren't" and you hung up angrily.

The reality is that we did respond each time you called us. The toilet in question (one of 5 in the property) did need a special fill valve which is not a part that is readily available and could not be installed by your husband. The plumber does not work on Sunday, but he was there on Monday and fixed the issue promptly. We did not think this matter was of grave importance given the fact the property has other bathrooms and the matter was resolved the next day.
The lightbulbs that were burned out were replaced with what we had on our vehicle, and when we returned to the house to complete the job the man we encountered indicated "everything is fine...no need to do anything else."
We deny that the mainteance man ever made comment about the owner not caring about this property or having a list of items that were not rectified. As you know you there are other reviews on here which contradict that and you in fact communicated with the owner in making this reservation and during your stay. It simply isn't true that the owner does not care, but he indeed is well aware of your stay and the issues you mention here.
Regarding the "pump tank" we do apologize that the property next door had their septic tank pumped during your stay, but obviously this was an isolated situation that can not be affected by the homeowner or our company.
We are sorry our attempts to make you happy failed on this, and can only hope that you know that your dissatisfaction with Aweigh from it all is not something others have shared.
All the best!

Tim
This response is the subjective opinion of the management representative and not of TripAdvisor LLC
Problem with this review? Thank you. We appreciate your input.

Punxsutawney
Reviewed 9 September 2012 for a stay in July 2012
Date of stay: July 2012
Would I recommend this holiday rental to my best friend?
Was this review helpful? Yes
This review is the subjective opinion of an individual traveller and not of TripAdvisor LLC nor of its partners.
Problem with this review? Thank you. We appreciate your input.

Hendersonville NC
Reviewed 13 July 2010 for a stay in June 2010
Date of stay: June 2010
Travelling group: Family (extended)
Your age range 35-44
Would I recommend this holiday rental to my best friend?
Was this review helpful? Yes
This review is the subjective opinion of an individual traveller and not of TripAdvisor LLC nor of its partners.
Problem with this review? Thank you. We appreciate your input.

Ontario
Reviewed 30 September 2009 for a stay in August 2009
Date of stay: August 2009
Was this review helpful? Yes
This review is the subjective opinion of an individual traveller and not of TripAdvisor LLC nor of its partners.
Problem with this review? Thank you. We appreciate your input.
Previous Next
1 2 3
Updating list...
Still can't find what you're looking for?

Looking for a place to stay in Corolla?
View all 200 holiday rentals