“Perfect Getaway!”
eHhZXzEzX0RteQ==
other travellers have booked this property

Review of Private mountain vacation cabin with a hot tub! 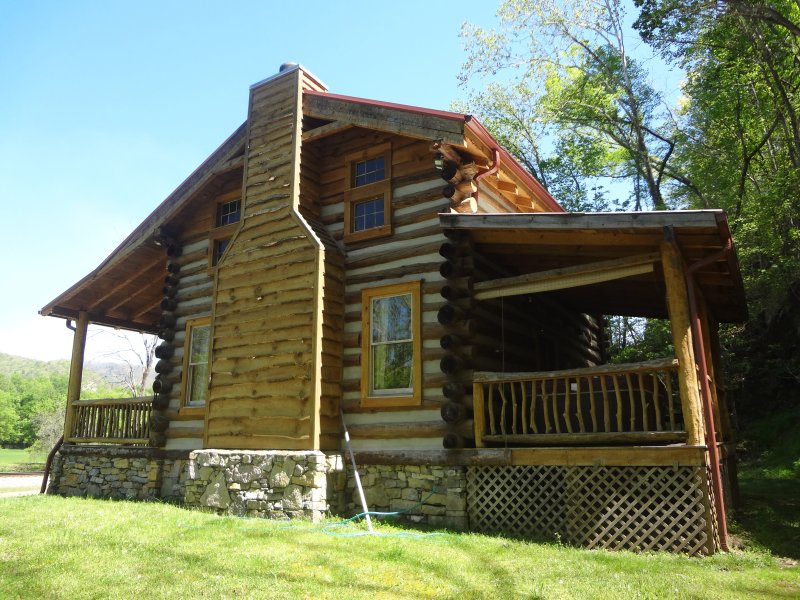 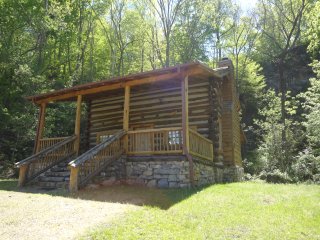 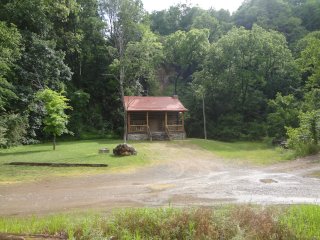 Excellent - based on 13 reviews
Write a Review

This is a perfect cabin and location for a getaway. The cabin itself was so beautiful and it was in a great location. Very private, quiet, perfect...
The owners even left us a birthday card and cookies, which was so thoughtful.
My husband was excited to fish in the 3rd oldest river in the world, which is located right out your front door! After fishing, enjoy steaks off the grill and then relax in the hot tub and then curl up by the fireplace and watch a movie.
We were very surprised by the train and thought it to be very romantic. Not something you experience every day and I loved it! We put a few coins on the rail and took them home as souveniers :)
We look forward to staying at the Limestone again. Thank you Harold and Sadie.

Date of stay: January 2015
Liked best: Location, hot tub, fishing, cabin
Liked least: queen bed (spoiled with a King at home)
Travelling group: Spouse/Partner
Would you recommend this hotel to a friend?   Yes.
Was this review helpful? Yes
This review is the subjective opinion of a TripAdvisor member and not of TripAdvisor LLC
Problem with this review? Thank you. We appreciate your input.

2 helpful votes
“Most relaxing vacation ever!”
Reviewed 24 July 2014 for a stay in July 2014
2
people found this review helpful

This will be a fairly comprehensive (i.e., long) review, so I’ll begin with the bottom line so you don’t have to read it all to get the overall picture. My wife and I (married 44 years) stayed at the Limestone Cabin for four days in July, 2014. Our stay was delightful—quiet, romantic, and relaxing. The cabin was beautiful, well outfitted, and scrupulously clean. It was the consummate vacation, and we will certainly being doing it again.

Now for the details. Unless you have a new GPS with the latest map updates, call Harold in advance for directions. Bing, Google maps, and Mapquest are not accurate—they all show an access road that does not exist. The first time you turn off highway 25/70 and start down the rather tortuous one-lane Boy’s Home Road, it can be quite disconcerting. After about a mile, it looks like you went the wrong way because the road changes from paved to gravel, to a rocky path which parallels the railroad tracks. Trusting my Garmin, I continued, but it was pure faith because it just didn’t look right. The path twisted and turned but fortunately we passed a couple of cabins so we kept pressing on. Finally, when the path looked like it was about to end, we reached 1630 Boy’s Home Road. I certainly would not advise trying to find the cabin in the dark your first time around, but after you do it once it is really not that big a deal.

If you are coming up from Asheville, I’d recommend you stop off in Marshall at the Ingles supermarket and stock up. It is a large, clean, beautiful store easily the equal of any we have in Charleston. Marshall is a one-hour round trip, so you’re not going to want to make the trek too often. Gas up in Asheville or Weaverville. Regular was $4.22/gallon in Hot Springs. Almost got some just to say I'd spent >$4/gal for gas, but resisted the urge.

Hot Springs is a wide spot in the road (actually, the Appalachian Trail) which is a one-mile walk along the railroad tracks from the cabin. Not much there—a small general store which I didn’t go in and a fairly well equipped outfitter where I purchased the obligatory souvenirs.

No cell phone, no landline, no wi-fi. As someone who does most of my personal and business communicating using one of those modes, it was a bit of culture shock to be completely cut off. Got over it pretty quickly, though, and my need to stay in touch was assuaged by satellite TV. When I walked into town there was still no cell connectivity, but the library has free, open wi-fi access so you can let the folks at home know you’re okay. In fact, we didn’t get our cell phone connectivity back until we were a couple miles outside of Marshall on the way home. US Cellular is the principal provider in North Carolina so if you’re carrier is compatible maybe you won’t lose service. Ours is Sprint and it definitely did not work.

So what did we do for four days? For the most part, absolutely nothing, and it was delightful. We spend many hours just rocking on the front porch enjoying the spectacular view and talking or reading (make sure you have plenty of material on your e-reader--you won’t be able to download anything once you get there, at least not on the Kindle 3G service.) The train comes by about three times a day—believe it or not, we actually looked forward to its arrival. You will especially enjoy evening twilight when the forest sounds change from cicadas to tree frogs and the fireflies come out. It’s been many decades since I’ve caught fireflies and put them in a jar (thoughtfully provided by Harold). We saw some deer, what was either a muskrat or a beaver (didn’t get a good enough look at its tail), a couple bunnies, and a black and white cat that looked surprisingly well fed. Harold told us the woman who lives in the house about 500 feet up the mountain behind the cabin feeds him/her only the best cat food, so he/she was completely uninterested in the smoked ham lunch meat we offered.

As for humans, when we first arrived, there were a couple guys about 100 yards further down the “road” fishing in the French Broad River, but after they left on our first day there we didn’t see them again. We saw someone fishing across the river on two occasions; a young family with three preteens walked by along the railroad tracks the third day we were there, and an occasional group of kayakers passed by. Other than that, we didn’t see anyone for four days.

The hot tub was a welcome treat at the end of the day. Don’t know whether it’s the warm water, the romantic atmosphere, or the absolute feeling of solitude but I challenge anyone, no matter how long they’ve been married, not to get frisky in the hot tub.

The weather was delightful. It started out with highs in the 90s, but we were lucky enough to experience an atypical July cool down with temperatures in the mid 70s during the day and high 50s at night. Couple of rainshowers—it’s enjoyable fun to watch the storms come in over the mountains and then dissipate leaving wisps of fog rising from the valleys.

Stairs to loft are a bit steep, so be cautious if you're mobility impaired.

If you want exciting night life, stay in Asheville. If you want the most relaxing vacation of your life, I strongly recommend Limestone Cabin.

Date of stay: July 2014
Liked best: Solitude and, surprisingly, lack of cell phone and wi-fi
Liked least: Nothing
Travelling group: Spouse/Partner
Would you recommend this hotel to a friend?   Yes.
Recommended for:
Was this review helpful? Yes
This review is the subjective opinion of a TripAdvisor member and not of TripAdvisor LLC
Thank you so much for the wonderful review!
This response is the subjective opinion of the management representative and not of TripAdvisor LLC
Problem with this review? Thank you. We appreciate your input.

Beautiful cabin. Very Peaceful and private. Would definitely stay again..it was as promised on web site. the porch was a great place to sit and listen to the rain and watch train go by..history of structure was interesting..

Date of stay: June 2013
Liked best: all of it, truly beautiful place and peaceful. porch was great as was jacuzzi.
Liked least: the only thing i can think of is maybe the bed..not quite as comofortable as mine at home, but still not a huge factor.
Travelling group: Young Children
Your age range 35-49
Would you recommend this hotel to a friend?   Yes.
Recommended for:
Was this review helpful? Yes
This review is the subjective opinion of a TripAdvisor member and not of TripAdvisor LLC
Problem with this review? Thank you. We appreciate your input.

This was the first time in 20+ years my husband surprised me with a weekend getaway, perfect for Valentines! The cabin was beautiful and had everything we needed. The cabin was cozy and warm, we loved the fireplace and the jacuzzi! We were a little nervous when we seen the train tracks out front, but it was very much a wonderful addition to our stay! My husband and I look forward to returning!

Date of stay: February 2013
Liked best: The seclusion & quiet
Travelling group: Spouse/Partner
Your age range 35-49
Would you recommend this hotel to a friend?   Yes.
Was this review helpful? Yes
This review is the subjective opinion of a TripAdvisor member and not of TripAdvisor LLC
Problem with this review? Thank you. We appreciate your input.

Mr. Finley and his wife were so very helpful on the telephone and answered all of our questions before we arrived. The location of the cabin is secluded. It is a truly secluded getaway. We loved the fireplace and slept there all night. The cabin was warm and cozy. We could feel our stress drift away! The picnic area is beautiful. It's like a park there with all the mature trees along the river. We enjoyed our meals over there. We loved it and would like very much to visit again!

Date of stay: October 2012
Liked best: The seclusion
Liked least: No phone access...just for emergency
Travelling group: Spouse/Partner
Would you recommend this hotel to a friend?   Yes.
Recommended for:
Was this review helpful? Yes
This review is the subjective opinion of a TripAdvisor member and not of TripAdvisor LLC
We appreciate you giving us the great review! We are glad you enjoyed your stay and thanks for leaving the cabin is such great shape! Hope you can return again soon.

Happy holidays!
Harold and Sadie
This response is the subjective opinion of the management representative and not of TripAdvisor LLC
Problem with this review? Thank you. We appreciate your input.
Previous Next
1 2 3 4
Updating list...
Still can't find what you're looking for?

Looking for a place to stay in Hot Springs?
View all 27 holiday rentals