The Lawns Hotel
Lock in the lowest price from these sites

Expedia.com
Hotels.com
Travelocity
View all 13 deals
Prices are the average nightly price provided by our partners and may not include all taxes and fees. Taxes and fees that are shown are estimates only. Please see our partners for more details.
Sunshine804891
1

Was very surprised to read the poor reviews with regard to customer service - we stayed for two nights and ate in the restaurant on both evenings as well as breakfasts with no problems whatsoever. The staff were friendly and helpful, the service times were entirely satisfactory and the food absolutely delicious. We tried the crab, cajun prawns, hunters chicken and a smoked haddock loin from the specials board - all really lovely and can especially recommend the lemon posset for desert - it was absolutely lovely. The room was great and again we had no problems - a really enjoyable and relaxed stay. Thank you Steve and your team for a wonderful short break we will be returning to see you again!More 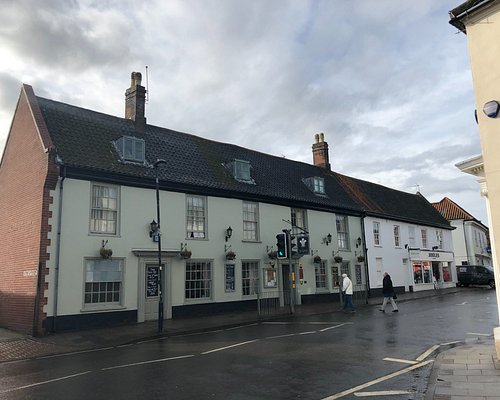 The Feathers Hotel
US$166

Expedia.com
View deal
Free cancellation
Reserve now, pay at stay
Hotels.com
US$166
Agoda.com
US$156
Priceline
US$173
View all 13 deals from US$156
507 reviews
0.1 km from The Lawns Hotel
We compared the lowest prices from 13 websites
The Wheatsheaf

Expedia.com
View deal
Booking.com
Agoda.com
US$208
eDreams
US$222
View all 11 deals from US$208
16 reviews
6.2 km from The Lawns Hotel
We compared the lowest prices from 11 websites Recently stayed for the weekend, and decided to treat ourselves to a Superior Double Room which was advertised on the website as having a shower over the bath, but there was no shower, only a hand held shower attachment.......not very "Superior", or what we paid for. I queried this, but was told that the hotel was full, and people in other rooms had booked before us, so we could not move rooms.
On the second night, the fire alarm went off at 1:30 in the morning, so guests evacuated, at which point we discovered there were no staff on site, and no response from the contact phone numbers. Luckily the Fire Brigade were there very quickly and dealt with the situation. The next day, by way of an apology, we were offered a free drink if we were dining in the hotel that night, but as we weren't, no drink was forthcoming.
We were on the first floor, and on the Friday and Saturday night could hear music from the bar area until around midnight.
The location was great, and the food very good, but overall, it felt like as guests. we weren't made to feel welcome, and it was like we were an inconvenience to the staff.

This review is the subjective opinion of a TripAdvisor member and not of TripAdvisor LLC
Jed E
11
Reviewed 1 June 2021 via mobile
Really appalling service. Steve is so rude!

The food was nice but the service was dreadful! We arrived at our table and it took 30 mins too take our drinks order. It took a further 20 mins for them too bring the drinks over,they had staff just standing around talking not doing their jobs. we had too ask where they got too and then suddenly they brought them out. After sitting there for about a hour they finally took our food orders but the person who took our order was so rude! his name was Steve. I asked about the prices of one main course because the price for one course wasn't on the menu. He turn round and said ' if you actually open your eyes and read the menu it says at the bottom' when in actual fact it only specified for 2 main courses. when I finally got my food I asked Steve for some salt and vinegar but he never brought it out. When we got the bill he had the absolute cheek too ask for a tip. I was appalled by the service in this place it's a shame because the food was nice. Definitely would not recommend.

Room tip: I would advise you not too go here until they sort out their service
Trip type: Travelled with friends
Ask Jed E about The Lawns Hotel
1  Thank Jed E

This review is the subjective opinion of a TripAdvisor member and not of TripAdvisor LLC
197jadec
Poole, United Kingdom
2
Reviewed 1 June 2021 via mobile
Great place to eat.

Visited the lawns many times before so over the weekend we went back to see how the refurbishment came along, I was very impressed. This had been needed, I am pleased to say the place looks great now.

We sat in the garden over the bank holiday weekend and enjoyed some amazing food, the cajun prawns and the Korean beef would both be recommend, we followed this with duck leg and lamb special. The food was incredible, full of flavour and presented amazingly.

We would highly recommend this place, lovely friendly staff and the best beer garden in the area.

I had noticed the last few reviews aren't soo lovely, so that inspired me to let everyone know how amazing this place is.

First visit to The Lawns for a meal. A glance down the menu showed that main courses were in the £15-£18 range and desserts £8 - £9 and they were all fairly run of the mill meals. Attempts had been made to dress them up a bit by using words like “jus” which is really just a poncy word for thin gravy made with meat juices. The words Blakeney and Norfolk featured several times too.

I chose the asparagus tart but the asparagus was almost raw and difficult to chew and the portion was small. The “Blakeney” salad turned out to be a few salad leaves and a couple of halved cherry tomatoes ..... that’s it!

The desserts were really overpriced and served on huge plates which made them look even smaller than they were. Why do some places presume this is what diners like?

I could have cooked any meal on that menu myself so when I eat out I like something a little bit different and I expect to pay a bit more but I felt our meals were overpriced for what they were.

To be honest a meal at any pub chain is just as good and over half the price so I would not eat there again.

This review is the subjective opinion of a TripAdvisor member and not of TripAdvisor LLC
baconandmarmalade
London, United Kingdom
1
Reviewed 25 May 2021 via mobile
Nice dinner, bad attitude

I had a very nice meal at The Lawns with some friends. There were two waiting staff and after a while we realised neither were wearing masks. Before we left I politely asked the manager why that was and got a stroppy reply saying that he has asthma and the other staff member suffers from anxiety and they work 18 hours a day. I said that was fine and I was just wondering. I then politely suggested they wear exemption badges. He waved a card hanging round his neck at me and said "What do you think this is?". As I had my back to the main part of the restaurant throughout the meal I hadn't seen it before and nor had anyone else in my party. We all felt uncomfortable throughout the meal that the staff were leaning over the table without masks. It would have only taken a second to explain when we arrived that the staff were exempt and we would have had a more enjoyable meal and avoided a conversation about it with the bad-tempered manager.