US$300
View deal
Booking.comUS$300
PricelineUS$300
Hotels.comUS$300
FindHotelUS$300
CheapTicketsUS$300
Trip.comUS$300
View all 16 deals
Prices are the average nightly price provided by our partners and may not include all taxes and fees. Taxes and fees that are shown are estimates only. Please see our partners for more details.
Travelman1890
21

I stayed here last night for Memorial Day. It was one of the best resorts I have ever stayed at, and I liked how the suite had an upstairs. My only problem was that on the porch there were used cigarettes on the ground when my family and I arrived in the room. Other than that, the room itself was clean.

Room tip: If you arrive at the place around 1 or 2 o clock, you will have access to the activities, but sometimes the room(s) won't be ready until 4.
Trip type: Travelled with family
See all 688 reviews
Nearby Hotels

Camelback Lodge and Indoor Waterpark
US$329

Taking safety measures
We compared the lowest prices from 7 websites 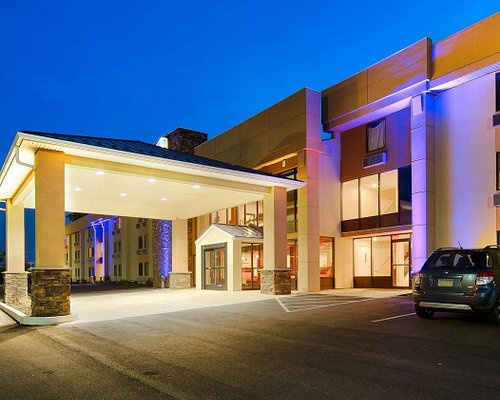 Breakfast included
Best Western Plus Poconos Hotel
US$183
US$132

Just horrible. Place felt dusty. No temperature checks at pools. Completely overcrowded. Children entertainment was horrible. I didn’t see one employee wipe anything down. The food tasted like cafeteria food. Everything was expensive. I literally could have booked a flight to Florida instead. Last time I ever go back to Great Wolf Lodge in PA. What a huge disappointment. I really hope the reviews get back to the CEO because it looks like there are a lot of us that had the same experience. SAVE YOUR MONEY!

I was incredibly nervous coming here after reading all the negative reviews about it being unclean and overcrowded. My family came here for a weekday getaway from Wednesday to Friday in May and we’re having an amazing time.

We checked in at 1pm and our room was already ready. Even if it wasn’t, they still give you water park access. The water park is as clean as it can be for an open area with people and small kids. I’ve been to water places pre-Covid, and this one didn’t gross me out.

We ordered dinner outside of the hotel since we aren’t ready to eat indoors yet and I suggest you do too if you’re worried. We got coffee at the Dunkin’ Donuts in the morning and the lines were tolerable. The people were pleasant and even gave my children stickers.

I must say, I was really worried after reading the reviews. As someone who was expecting this place to be dirty and disappointing, I must say that I worried for nothing. We’ll be coming back in the fall for sure!

This review is the subjective opinion of a TripAdvisor member and not of TripAdvisor LLC
noahd731
34
Reviewed 9 May 2021
Perfect in every way!! So impressed.

Great Wolf Lodge is my family's number 1 vacation spot! For one they handle the virus very well! Masks are required and they follow CDC guidelines. The room was amazing! It was so clean. You can really tell that the staff are caring. Speaking of staff they are so nice! And of course I can't make a GWL review without mentioning the amazing water park! There are so many things to do. Sure there are some problems but this is GWL. They can make a bad idea and somehow make it good. So overall I STRONGLY reccemmend going on a vacation to GWL.

Room tip: In my opinion you should get any premium suite. Nice and clean
Ask noahd731 about Great Wolf Lodge Poconos
2  Thank noahd731

So the Great Wolf Lodge had a pledge which I think they call the paw pledge or something like that. Pretty much promotes following CDC guidelines for social distancing and such. THEY are the ones that should be taking this, not the guests. We checked in on 4/30 between 6pm and 7pm. We were immediately in a crowded lobby due to 80% of the lobby being gated off for some story time leaving just a narrow passage for guests entering and exiting and guests attempting to check in. We were assisted by a female employee at the front desk named Tiffany. She was awesome.

The kid camp room was just okay and also appeared to be clean. No complaints there. The arcade was large and they were keeping count on how many guests were in there at a time which was great. But, there was no cleaning of any games. We've been to other attractions during the pandemic and have seen thorough cleaning of high traffic areas for touching. We didn't see any of this in the arcade.

I made the mistake of purchasing the meal plan. Breakfast at the buffet style restaurant was just awful. My French toast had a grey paste in the middle which I'm not sure what it was. I refused to try it. Possible a strawberry compote? The turkey sausage was cold in the middle and the bacon was only fat and you were left chewing on it. We ended up just eating pre packaged cereal. The waitress was nice so that did save some of the experience. For lunch we ate inside the water park. We ordered our food around 1pm which seemed like a busy time. Halfway through ordering our food,, the employee started talking to another employee and walked away. She took a water bottle out of the cooler and walked away. She then came back like she never left and We continued our order. Half our food was ready and the rest they gave us a buzzer so we would know when it was ready. After about 15 minutes of waiting my wife checked the status and a guy laughed saying it had been sitting there ready for a while. Our buzzer never went off and we waited off to the side maybe 20ft from where you order. Turns out after all that they forgot the French fries for one of the meals which made us go back. Dinner was back at the same buffet we ate breakfast and it wasn't great at all. I would not get the meal plan and just order elsewhere.

The waterpark itself was great. Chairs were grouped off in threes and we entered right at opening so we had no issue getting a chair. It does get crowded in some areas but it was easy to find a different activity in the park to do until the lines lessened or became less crowded. I know a lot of review comments were about masks not being worn in a Waterpark. I get the complaints but I don't know what people expected. It's hard to keep a mask dry while tubing so wearing ot from attraction to attraction is tough. We understood that risk ahead of time.

I paid just over $1,000 for a family of 4, Friday to Sunday in a kid camp suite. That's with a meal plan. We weren't even close to seeing the value. The Waterpark for a day trip, absolutely. Staying and eating there, no way. I feel like a just wasted a lot of money. I think the resort caters itself to out of state guests who will spend the money because they are there and don't have a choice. I wanted to enjoy it and make the stay a yearly trip for my family but I just don't see the value.

This hotel is filthy. Clearly understaffed. No hand sanitizer available in machines. We had to tell an attendant. Packed lines everywhere for food whether it’s Dunkin’ Donuts or the restaurant. Excuse always is the “system is slow” so they rather have everyone stand packed together than just provide food despite paying $400-600 a night for a room. Buffet ran out of salmon and people waited 20 plus minutes. Food is generally inedible. Tables are dirty. The sad part is we haven’t even used the water park yet. Definitely would not come back. It’s a shame because the staff is extremely courteous but the situation is beyond them.