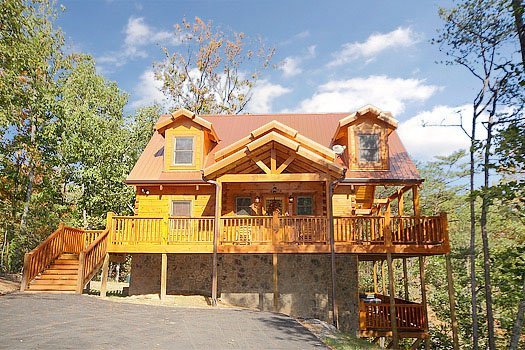 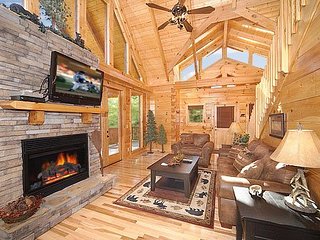 Average - based on 9 reviews
Write a Review

We arrived late afternoon at this cabin on 7/18/16. There are three floors with baths. When the third floor bathroom was used, it leaked to the second floor all over the toilet area and there was some kind of poo all over the floors throughout the cabin. Next day went to office and reported it. Service guy came out and did a little chalking. No one came to clean poo. I sweep it up and found more the next morning all thru the cabin. Showers now leaked thru all three floors!! Went back next day. Customer service was terrible, they said they could not help us and to go ahead and use the showers. Told them there was enough water someone could have fallen and gotten hurt .The poo was not rats but bats which we could hear thru out the cabin. I guess they had not repaired anything since the person reviewed in June 2016 with the same problems!! We lost one day of vacation moving between cabins because of problems they told me they KNEW about before we came!!!!!!

Date of stay: July 2016
Liked best: getting out
Liked least: plumbing issues and bats
Travelling group: Extended Family
Would you recommend this hotel to a friend?   No.
Was this review helpful? Yes
This review is the subjective opinion of a TripAdvisor member and not of TripAdvisor LLC
I want to apologize for the problems you encountered during your stay. I want to assure you that I will following up on the maintenance persons response to the leaks in the shower. That isn't typical of the maintenance companies we work with. Yes we were aware that the cabin had had a problem with bats, but we thought it had been resolved. Bats are protected by the federal goverment. You can't kill or trap them. The only prevention is to try to seal up any opening where they are coming in. All the cabins we manage are privately owned. The owner of this cabin spent over $4,000 trying to rid the cabin of the bats. I will be contacting you to follow up with your complaint. Again I apologize.
This response is the subjective opinion of the management representative and not of TripAdvisor LLC
Problem with this review? Thank you. We appreciate your input.

Let me start by saying that this cabin is beautiful and has lots of supplies In the kitchen. We chose this caring because we had 2 families with 9 people total. Lots of room for all of us. When we went to arrive we tried to check in an hour early (the cabin wasn't rented the night before) and we were told no. Ok no big deal. When we get to the cabin things seemed ok not as clean as others we had stayed at but it was nice. Very peaceful and quiet. We noticed around the TV on the main floor looked like mice droppings and it was all over the floor. We could hear some squeezing coming from the fire place. There was a sign on the fridge saying that natures creatures could visit. Sill ok what ever. The big issue was when we all went to go to d we discovered that the satellite didn't work. So we called and reported it. Then we tired. DVD players...only the one in game room worked. The next day the carbon monoxide detector started going off and the jacuzzi tub in the master bathroom wouldn't work. All these things were reported. They did send someone out to look at the issues. They worked on the tub, took the carbon monoxide detector back with them and discovered the hard drive was bad for the satellite this was Sunday. They did not fix the DVD problem so we had 5 kids with no TV! We called multiple times and they did. It send anyone to fix it. They left us a note on the first day saying that we needed to put the tv on AV. We did do that but when it comes up disc error in every did you try it's a problem with the did player. They did. To get the satellite fixed until thurday. One of the big selling points was that this cabin had nice tv and satellite and did plyers. E ladies we spoke to as very nice but our issues were not taken care of. The jacuzzi tub was not fixed it would turn on by its self. Something was leaking through to the bottom floor in the shower. Oh and did I mention that what we thought was mice droppings was actually bat poo! And a lot of it. It's very disappointing when you spend over $2,000 to stay somewhere for a week and you have issues that aren't resolved and we received no credit back for the inconvenience. We had wifi but it wasn't strong enough to load a video so we couldn't even have Netflix. We will not stay here again.

Date of stay: June 2016
Liked best: The space
Liked least: No TV/DVD players that worked and bat poo all over the house
Travelling group: Extended Family
Would you recommend this hotel to a friend?   No.
Was this review helpful? Yes
This review is the subjective opinion of a TripAdvisor member and not of TripAdvisor LLC
I want to apologize for the problems you encountered during your stay. This is certainly not typical. We take guest complaints seriously and I researched in depth the problems you listed in this review. I checked with the satellite maintenance man and found that the satellite had a bad hard drive that affected four different TV's in the cabin. A new one was orderd and installed on Thursday. I wasn't aware that you continued to have a problem with the DVD player. The hot tub do circulate on their own every so often. That's just the way they work. We will check out the leaking, but in a log cabin, the floor of one level of the cabin is typically the ceiling of the level below. So if anyone splashes water from a tub or shower, this will leak below.
Animal control has been contacted to remove the bats. They aren't in the actual cabin, but in the chimney. Unfortunately, these things occur when you build a cabin in their habitat. We know that this was unsettling to you and that you didn't have the type vacation that you had hoped for. A member of our mangement team will be contacting you. Thank you for sharing your experience and letting us know how we can improve our service to future guests.
This response is the subjective opinion of the management representative and not of TripAdvisor LLC
Problem with this review? Thank you. We appreciate your input.

The second floor has one nice bedroom with a door and bathroom with a Jacuzzi tub that opens to the loft which has a futon sofa. The master bedroom with a fireplace is on the main floor. There is another king bed and bath in the basement with the game tables and a pull out sofa. The hot tub was larger than most cabins offer from my experience and the porch furniture was quite comfortable. There is a pretty serious incline to get to the cabin drive.

Date of stay: April 2016
Liked best: The second floor bedroom.
Liked least: I have had a better view, but this was good enough!
Travelling group: Friends
Would you recommend this hotel to a friend?   Yes.
Recommended for:
Was this review helpful? Yes
This review is the subjective opinion of a TripAdvisor member and not of TripAdvisor LLC
Problem with this review? Thank you. We appreciate your input.

NC
Reviewed 12 July 2013 for a stay in June 2013
Date of stay: June 2013
Would I recommend this holiday rental to my best friend?
Was this review helpful? Yes
This review is the subjective opinion of an individual traveller and not of TripAdvisor LLC nor of its partners.
Problem with this review? Thank you. We appreciate your input.

Ky.
Reviewed 28 June 2012 for a stay in May 2012
Date of stay: May 2012
Would I recommend this holiday rental to my best friend?
Recommended for:
Was this review helpful? Yes
This review is the subjective opinion of an individual traveller and not of TripAdvisor LLC nor of its partners.
Problem with this review? Thank you. We appreciate your input.
Previous Next
1 2 3
Updating list...
Still can't find what you're looking for?

Looking for a place to stay in Pigeon Forge?
View all 1,424 holiday rentals