Embassy Suites by Hilton Dallas DFW Airport South
Lowest prices for your stay
Lock in the lowest price from these sites
US$146
US$112
Free cancellation until 23/05/21
View deal
EmbassySuites.comUS$112
PricelineUS$112
FindHotelUS$112
Hotels.comUS$112
Expedia.comUS$112
StayForLongUS$146
View all 20 deals
Prices are the average nightly price provided by our partners and may not include all taxes and fees. Taxes and fees that are shown are estimates only. Please see our partners for more details.
hanneen88
Toledo, Spain
1

During the weekend the hotel was extremely packed the lounge areas were dirty so dirty that I witness to pancakes sat in the fountain for two days straight the pool was packed and social distancing was not being followed once Monday came the hotel was a lot cleaner and more well-maintained. However the pool area stunk unbelievably like mildew. We were requested extra towels just about every day and never got them. Our room had boogers on the walls in the condition was just not very well cleaned I even found a toenail on the floor. I love staying at the Embassy suites I will never come back to this one.More

Show less
Review collected in partnership with Embassy Suites Hotels
This business uses tools provided by Tripadvisor (or one of its official Review Collection Partners) to encourage and collect guest reviews, including this one.
See all 391 reviews
Nearby Hotels DFW Airport Hotel & Conference Center
US$49
Booking.com
View deal
FindHotel
US$46
Tripadvisor
US$46
ZenHotels.com
US$51
View all 18 deals from US$46
466 reviews
0.7 km from Embassy Suites by Hilton Dallas DFW Airport South
We compared the lowest prices from 18 websites 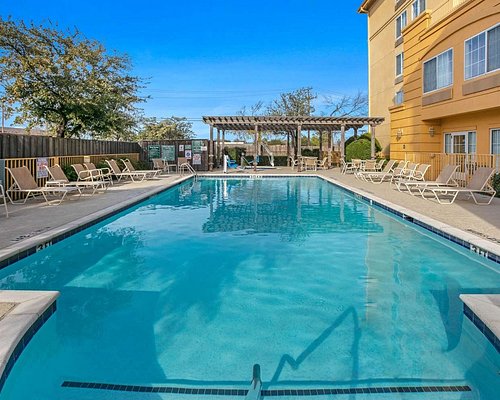 Embassy Suites
At checkin the young lady checked me in, charged my card and gave me room 310 keys. My children and I went to the room and realized someone else was occupying the room after walking in. Went back to the desk and the young lady told me she didn’t have a reservation for me. Courtney Penrod reserved 2 rooms and one was for me. Both Courtney and I spoke with customer service over the phone multiple times leading up to the trip. Everything was clear and I just needed to change my payment once arriving. The rooms were 310 and 311. The front desk told me she did not have 311 reserved for me. She then created a new reservation. I asked for 3rd floor and she said known were available. She also acted like it was no big deal that she gave me someone else’s room key. Once we got in the room it smelled very musty, but we were leaving right out. The room felt more like Motel 6 and Not Hilton Brand. There was 1 set of towels in the room and we had four people.

Next the bathroom door was rotting. There was long hair on the ceiling and on the ceiling in the bathroom. There was rust on the door. I went to front desk for towels when we returned to our room that evening. Friday night I ordered food from the restaurant. They did not put dressing in my bag or butter for my salad and bread. I went to ask and the girl working rolled her eyes as she walked away!
Saturday we left the hotel at 10:00am. I stopped at the des and asked for 4 sets of towels, remove old towels and empty trash while we were out. Returned at 4:00pm and nothing had been done. We were leaving again and stopped at the desk with the same request. When we returned at 9pm there were pool towels in which 2 of them were dirty,on the couch. Not the 4 sets of towels I requested. The dirty towels were still there and trash had not been emptied. I returned the towels to desk and spoke with the manager. There was also no toilet paper in the room. The front desk gave me towels and toilet paper at 10:00pm and I had to go down to get it. Saturday morning at breakfast the same lady that worked the restaurant worked breakfast and was very rude and again rolling her eyes at the customers. Very unprofessional.

The pullout couch had mold on the bottom of the mattress. I will attach photos.
Next , my children were riding the elevator to our floor and the elevator stopped leaving the stuck between 2nd and 3rd floor!

Review collected in partnership with Embassy Suites Hotels
This business uses tools provided by Tripadvisor (or one of its official Review Collection Partners) to encourage and collect guest reviews, including this one.
Ask Navigator535894 about Embassy Suites by Hilton Dallas DFW Airport South
Thank Navigator535894

This review is the subjective opinion of a TripAdvisor member and not of TripAdvisor LLC
azbandits
Phoenix, Arizona
1
Reviewed 31 March 2021
Should be shut down!!

Very rude customer service not very professional at all. My family Slept in a room for 2 days that had standing water next to the bed ,Mold in living area and spider webs, door was off hindges, no towels for showers for 2 days . Worse hotel experience ever!!!!! Will be reporting to health officials. Me and 10 other families ........ this hotel should be shut down.

Review collected in partnership with Embassy Suites Hotels
This business uses tools provided by Tripadvisor (or one of its official Review Collection Partners) to encourage and collect guest reviews, including this one.
Ask azbandits about Embassy Suites by Hilton Dallas DFW Airport South
Thank azbandits

This review is the subjective opinion of a TripAdvisor member and not of TripAdvisor LLC
chrisglenn2021
1
Reviewed 31 March 2021
Zero or below this is the worst interaction I’ve ever had with any type of staff. Your management team should be embarr

Review collected in partnership with Embassy Suites Hotels
This business uses tools provided by Tripadvisor (or one of its official Review Collection Partners) to encourage and collect guest reviews, including this one.
Ask chrisglenn2021 about Embassy Suites by Hilton Dallas DFW Airport South
Thank chrisglenn2021

This review is the subjective opinion of a TripAdvisor member and not of TripAdvisor LLC
mturnil
Tampa, Florida
1
Reviewed 30 March 2021
Front Desk issues

The Fire Alarm was going off in error for three nights in a row. When we sought resolution, the Front Desk would not connect us to Management. I even requests a call back—but I never received one. Ultimately I spoke with the on-site Manager—on our check out day because I told the staff I would wait. Thankfullly the Manager was very apologetic and helpful. Very impressed with Dallas, this was just a rough stay for our family and does not reflect the quality we have come to know with Embassy Suites.

Review collected in partnership with Embassy Suites Hotels
This business uses tools provided by Tripadvisor (or one of its official Review Collection Partners) to encourage and collect guest reviews, including this one.
Ask mturnil about Embassy Suites by Hilton Dallas DFW Airport South
Thank mturnil

My restroom was nasty hair was left in the tub, rooms had a horrible smell , we no small towels, it was a Zoo , had to walk up and down flights of stairs in the middle of the night . Hotel did comp only one night . Was not enough

Review collected in partnership with Embassy Suites Hotels
This business uses tools provided by Tripadvisor (or one of its official Review Collection Partners) to encourage and collect guest reviews, including this one.
Ask tnwbell about Embassy Suites by Hilton Dallas DFW Airport South
Thank tnwbell