Average but nothing more

The new guest rooms are a definite plus for this hotel. Our room was located in the new part of the hotel. It was large and furnished nicely (especially liked the wallpaper and the wooden elements in the room). Bathroom was clean and mordern.

Unfortunately that was all the positive I can say about my stay here.
The staff wasn't very well trained (service in the restaurant would sure need some improvement) and not really friendly. Front Desk was sometimes simply not staffed and when you found somebody you always seemed to bother them. One evening we were downright urged to fill out a survey at the restaurant and the lady didn't seem to care that we were eating at the moment, which I found quite unpleasant...

Quality of the food was extremely bad and not what you might expect of a hotel - it was more like eating in school cafeteria in my eyes. This goes for all meals they offered throughout the day. After 2 days we decided to go out to eat lunch and dinner every night although we had paid for all inclusive in advance...

But I guess there is not much you can expect for the price they offered. I had an average experience here and was glad we booked only for a week. I wouldn't return but I think it is a nice choice for families looking for a low cost summer vacation. You just shouldn't expect too much...More 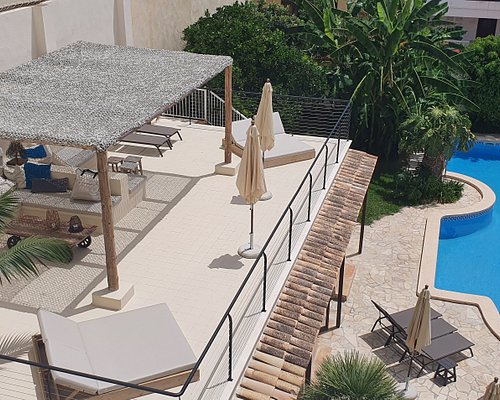 Breakfast included
Mamboo Hotel
US$85
Booking.com
View Deal
Free cancellation
Reserve now, pay at stay
Expedia.com
US$86
eDreams
US$85
FindHotel
US$86
View all 12 deals from US$85
5 reviews
0.5 km from allsun Hotel Illot Park
We compared the lowest prices from 12 websites 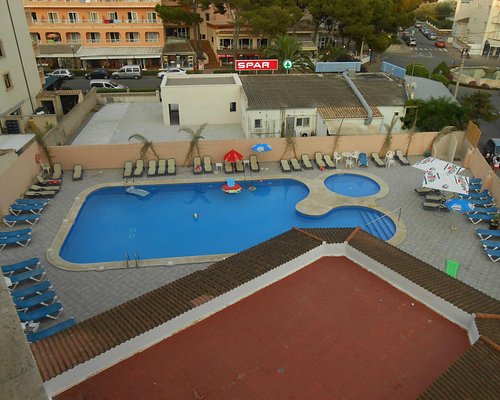 Expedia.com
View Deal
Booking.com
US$60
ZenHotels.com
US$38
StayForLong
US$67
View all 12 deals from US$38
27 reviews
0.3 km from allsun Hotel Illot Park
We compared the lowest prices from 12 websites 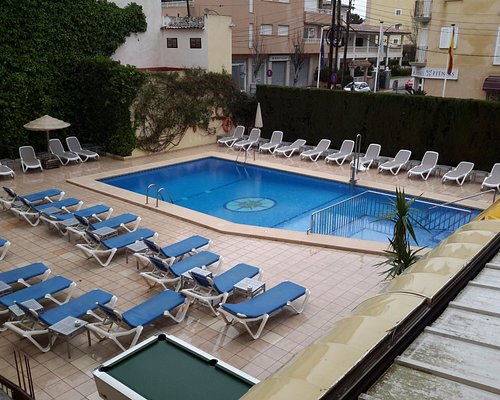 Amoros
US$61
Booking.com
View Deal
Expedia.com
US$57
ZenHotels.com
US$51
StayForLong
US$65
View all 15 deals from US$51
245 reviews
0.8 km from allsun Hotel Illot Park
We compared the lowest prices from 15 websites
Top Rated
Grupotel Aguait Resort & Spa

Beautiful hotel with genuinely friendly and helpful staff. The room we stayed in was beautiful and lovely and clean. There is an indoor pool with jacuzzi as well as 2 outdoor pools. I had hoped to use the spa for a massage while we were there but unfortunately I missed out on the chance to book in. Hubby used the gym and he said that it was good.

If your main language is English then be aware that the town is mainly visited by Germans. Not a problem if your German is fluent, but some of the staff struggle a bit with English. We managed to communicate but it was sometimes difficult, and by the end of the trip we were missing having real conversations!

Room tip: Rooms on the higher floors give a good view of surrounding landscape - the trees outside are quite tall. A/C is either on or off throughout the hotel - in April when we visited the A/C was off and the heating was on :-/
Ask 292judep about allsun Hotel Illot Park
1  Thank 292judep

This review is the subjective opinion of a TripAdvisor member and not of TripAdvisor LLC
tricia696
London, United Kingdom
11
Reviewed 9 September 2012
disappointing

Stayed here for 10 day 19-30 August. Very disappointed, tired hotel (closing at end of season for refurbishment) pity had not been told this when booking and priced paid didnt reflect this. All inclusive - food in restaurant not bad but breakfast awful . Snacks during the day were terrible, pizza and sandwiches, sandwiches wrapped in cling film and under cover but pizza left open and flies all over them. No snack available after 5.30 , any all inclusive I have been to previously had food available until the bar closed. Didnt fell treated ike a paying guest when went to the bar , staff would carry on with whatever they were doing i.e. filling dishwasher before serving. Queues at bar could have been avoided if more staff had been on duty. Teenage son extremely bored, entertainment team attempted to include but as mainly German holiday makers they were geared towards them. No pool table...... when asked was told there used to be one/two but due to constantly being damaged they no longer had them. And no space inside hotel to accomodate!!!! I beg to differ there was lots of rooms that could have accomodated pool tables etc. TV room - disaster no air conditioning too uncomfortable to stay in for more than a few minutes. Entertainment not entertaining, all done on a shoestring Ramon excellant member of the team, enoyed the boat trip but apart from that would have been better of just playing music in the evening.

This review is the subjective opinion of a TripAdvisor member and not of TripAdvisor LLC
clartst
Swindon, United Kingdom
3727
Reviewed 30 August 2012
Find somewhere else!

Our family of 4 (2 kids aged 3 and 6) stayed here for 2 weeks in August. The room was small, but adequate for 4 people and in need of an update. Once the kids beds were in use, the living area was very cramped. The bathroom was TINY and difficult to use when trying to bath / shower children. We were on the 2nd floor, overlooking the bar area - not a good spot as the evening entertainment happens here, which is VERY loud and goes on until at LEAST 11pm - with 2 young kids it was difficult to get them to sleep.

The pool was small but ok, although the surrounding area was grassed, not tiled which meant that when wet (all of the day!) it became a slippery mud bath. The mud then got carried onto towels, sun loungers, over feet and into the pool. I suggest the hotel invests some money in tiling this area. Several children's feet (6 in one day once) were cut by tiles on the steps getting into the shallow area of the main pool, which also needs addressing by the hotel. To get a sunlounger, don't leave it later than 7.30am to go down to the pool. After this time they're all taken by some crafty towels with no owners!

The restaurant was ok - staff attentive and plenty of variety of food.

The reception staff were professional but unfriendly. No information was offered on arrival about the hotel, location, restaurant etc etc. All information around the hotel was only in German, Dutch and Spanish - luckily I know a bit of Spanish. The kids club was only run in German, so my kids were ostracised by the staff, despite me making sure they knew they were British. The staff DID speak ENglish, it's just they couldn't be bothered when only 5% of the guests were English speakers (this was pointed out to me on more than one occasion!). I do not go to Spain to only hear German spoken - I'd prefer to hear the native tongue!

Overall, I'd say there are plenty of nicer places to stay in this resort. This is not really a 4 star hotel. It's really a 3* that has somehow achieved another star by having, say, a hair-dryer in the bathroom . I would not recommend this place.

This review is the subjective opinion of a TripAdvisor member and not of TripAdvisor LLC
podandsue
WIRRAL, MERSEYSIDE
2413
Reviewed 28 August 2012
choose illot suites and spa instead

We stayed at the Illot suites and spa just down the road from the Illot park. We visited the illot park a couple of times just to compare and thought the pool area was better at the illot park.. but the spa was twice the size and nicer at the illot suites. One draw back to the illot park was the situation/design of the baby pool .... if you had children of various ages, it was difficult to watch them in the water at the same time due to a wall around the little pool that obscured the view. It was clean and well maintained as it was tiled though... unlike the illot suites which had decking that needed attention.
We met a few people at the illot park who were so unhappy with the food that they had compained and arranged with the management to eat at our hotel, the Illot Suites.

This review is the subjective opinion of a TripAdvisor member and not of TripAdvisor LLC
emkae
essex
1739
Reviewed 26 August 2012
Not 4 star more 3, staff excellent

Well wasn't sure what to expect, it was 42 degrees and the air con in both the room and restaurants is awful and this took the edge off the holiday and we were just so hot and we love the sun and heat. Food was overall good, too much pork everyday not enough beef or lamb. Breakfast awful fatty bacon all you have to do is crisp it, scrambled egg rubber and fried eggs were being cooked in front of us with shell in them! Evening entertainment was twice as in two shows and then other nights just music. Had to complain about animation team on our last night because Ramon the adult animation was just wonderful and our children at least did something at 4 in the afternoon they are 14 and 11. We hardly say Ramazain the child team and when we complained to kamal the boss he was quite defensive and said we should have said something before, we shouldn't have to next day lots of stuff was on offer therefore they are just plain lazy apart from Ramon who is lovely and works hard. Again the bar staff lovely sylvio is just great and his dark haired lady colleague. The restaurant staff again very friendly and attentive. Can't fault them or reception.

Simple things could make this hotel the 4 star it could be but because of the above and paying for WiFi I would say its a 3 star.

The marina and port is lovely and walking distance as well as the beach there. The bigger beach we got the shuttle bus to which was very efficient and helpful.

Probably wouldn't return as not enough on offer for our teenagers but only through laziness of some of the team and this was high season.