Orbitz.com
eDreams
Priceline
View all 11 deals
Prices are the average nightly price provided by our partners and may not include all taxes and fees. Taxes and fees that are shown are estimates only. Please see our partners for more details.
brit933
Solbjerg, Denmark
197110

We stayed at the hotel for three nights, and it was great. Staff was very helpful, and the setting close to the canal is beautiful. There is a small wellness department with a pool, a sauna and a finnish sauna. Bevause of the corona, we could book the pool for an hour for the family alone, so we felt quite safe.
In the restaurant, we were given time slots, so not too many people would arrive at the same time, which worked very well.

See all 189 reviews
Nearby Hotels 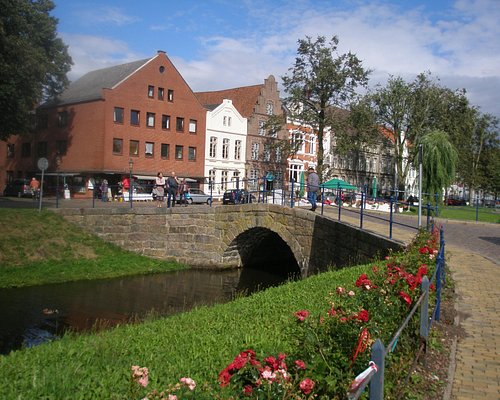 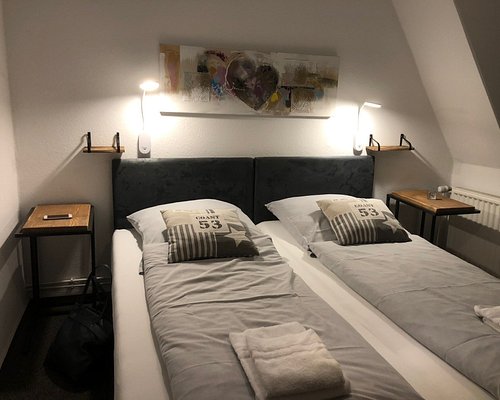 Eventhough the deal stated the room would be without a view, we got a beautiful large room with a view of the canal outside the building! The dinner was a pleasing experience not only for it’s deliciousness but also the way it was served on the plate.
What a great mother n’ daughter stay in the small adorable town.

This review is the subjective opinion of a Tripadvisor member and not of TripAdvisor LLC.
Stephan M
Crete, Greece
207145
Reviewed 27 May 2019
Seems like the best address

For a short stay in Friedrichstadt, this hotel does the trick. It's beautifully designed and it seems the owner has bit-by-bit purchased the whole street. This means, from the outside it doesn't look like much, but it's huge inside with lobby, restaurant and lots of rooms.

There is a car park available inside the buildings, with another sitting area. Outside in front, the sitting/coffee area by the river is neatly done, however it was a bit too chilly for us to sit outside.

The rooms are cute - not great luxury, but nicely done - ours was big and could use a bit of an upgrade. Double beds are nice, but two matresses/two blankets -- German style not everyone is used to. For s short stay, we'll definitely come back here...

This review is the subjective opinion of a Tripadvisor member and not of TripAdvisor LLC.
Eva S
1
Reviewed 1 January 2019
Super

Everything was outstanding:
The location, the room, the breakfast, the restaurant, the service and the friendly staff.
We will surely recommend this hotel to others and hope to return next year for more 1st class relaxation.

This review is the subjective opinion of a Tripadvisor member and not of TripAdvisor LLC.
Ahr45
Albertslund, Denmark
128152
Reviewed 13 August 2018
Location

Very nice hotel right in the center of the town. The minute you enter the hotel, you smell the German cleanliness - very nice! The room on first floor was spotless, and so was the pool and sauna area. Remember you are in Germany - men and women together without clothes. Natural and pleasurable.

This review is the subjective opinion of a Tripadvisor member and not of TripAdvisor LLC.
wulff_rasmussen
Copenhagen, Denmark
1751
Reviewed 1 August 2018
The Ringhotel Aquarium Boddenberg is a Top class hotel with a very good restaurant. I can only recommend the hotel.

The Ringhotel Aquarium Boddenberg is a Top class hotel with a very good restaurant. I can only recommend the hotel.
However, a couple of events with the staff ruined a bit the good overall impression.
1. On arrival (it was 30 degrees) we were allocated a room on the ground floor, next to the indoor pool and overlooking the courtyard, where the guests where having lunch. The nearest table was so close, that if our window was open, we almost took part in the lunch, and the the guest at the table, could look directly into our room. Very uncomfortable. Furthermore, there was yelling from the pool and constant noise from the hallway. I asked at the front desk if there was another room available, but they were fully booked.
Then the receptionist began to teach me (repent me)
-that other guests had liked the room very much
-that the noise from the pool probably would disappear
-that I just could pull the curtain for the window
-If the noise from the courtyard bothered, I just could close the window
suggesting that I was a bit cumbersome. I became so mad at her teaching arrogance that I was ready to find another hotel. But it 80% of the 4 day stay, is also a kind of money. Eventually the receptionist offered to find another room the next day, which also happened.
2. We had reserved tables for dinner, next to the canal, at hotel restaurant all four days. On the third day there was a boat parade on the canal, and therefore the restaurant was busy. When we arrived, the waiter rejected, that we had a reservation, but we could get a table facing the road. I protested, and at the same time, the above mentioned receptionist interferred and arrogantly began to teach me, that one could not reserve a specific table, but only, "a table" for example. facing the canal, an information we received the first day. But as we stood in front of a free table, it would be natural to choose this. But no, we could have another table next to the canal. Two minutes later, two guest were placed the table we could not get. (Remember no reservation according to the waiter). Shortly after, the receptionist lady came apologizing for a misunderstanding, and we could get the original table, which we refused as we finally had found a table.
Mistakes may occur, that is acceptable. But I can not accept
-to be taught and talked down to
-to be told if I can or cannot have an opinion, if a room in line with my expectations
-that I among other guests, have to discuss whether I had ordered a table or not.

This review is the subjective opinion of a Tripadvisor member and not of TripAdvisor LLC.
View more reviews
PreviousNext
12…